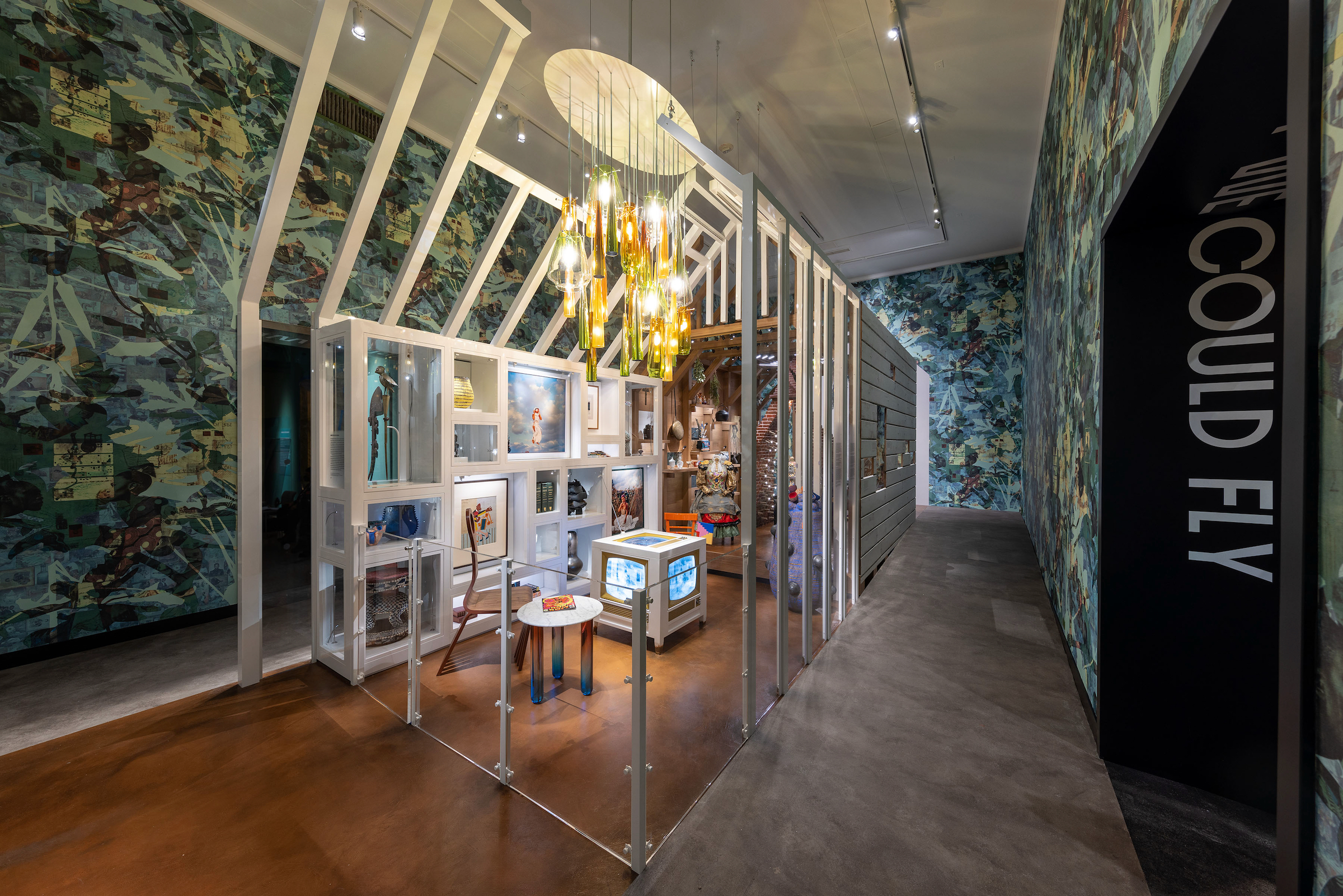 Archconservative magazine discovers Afrofuturism at the Met and is not happy

“Afrofuturism and the decline of our art museums” – beautiful use of the pronoun – resounds the title of Gilbert T. Sewall October 26 exam in World of spectators, the international edition of the British arch-curator magazine The spectator. This imperious “our” gives the game: the inferior races desecrate the Metropolitan Museum of Art, the Capitoline Hill of high culture (read: White).

Sewall is a conservative chronicler of American decline. He tut-tuts, in all the usual points of sale (The American Conservative, the American Spectator, National exam), about the disastrous state of the nation, affecting that sad but conscious tone to which every right-wing patrician aspires. Imagine William F. Buckley in a toga, channeling Edward Gibbon into the Decline and fall of the Roman Empire, and you get the general idea:

The Capitoline Hill, on which we sit, was once the head of the Roman Empire, the citadel of the earth, the terror of kingsâ€¦. This spectacle of the world, how did it fall! how that has changed! how damaged it is! The road to victory is obliterated by vines, and the benches of the senators are hidden by manure.

Seventy-five and still dazzling, Sewall whines like there is no tomorrow – which there will not be, he assures us, if schools use children as “guinea pigs critical breed theory“And” Woke California “(which prohibits”sections of toys for boys and girls “in a monstrous plan to” erase the genre“) have their way. Now he spotted another sign of the end of time: Afrofuturism in our Metropolitan Museum, of all places.

“‘The day before yesterday, we could fly ‘: an Afrofuturist period roomâ€(2021) is a collaboration between decorator Hannah Beachler, best known for her Oscar-winning vision of Black Panther‘s Wakanda; consulting curator Dr. Michelle Commander, associate director and curator of the Lapidus Center for the Historical Analysis of Transatlantic Slavery at the Schomburg Center for Research in Black Culture; and the curators met with Ian Alteveer and Sarah E. Lawrence. The title alludes to popular African-American tales about slaves who fled bondage by (literally) fleeing. Beachler, Commander and their collaborators use Afrofuturism’s faith in the radical power of speculative fictions as a launching pad. Inspired by the 19th century black settlement of Seneca Village, which flourished a few hundred yards west of the Met until the town razed it in 1857, invoking a prominent domain, to create Central Park, the he facility imagines an alternative future for Seneca residents.

It’s a magical realistic domestic interior where 19th-century household items from the American wing of the Met, African artifacts from the same period, and works by contemporary African-American artists coexist in what the culture theorist SaÃ¯diya Hartman calls for a state of “temporal entanglement” – the Afro-diasporic experience of historical time, in the post-slavery world, as one in which “the past, present and future are not discrete and cut off from one another. the other “. As the Conservatives note in their essay for the Met’s Quarterly Bulletin, the Afrofuturist period room invites visitors to the museum “to remember a shattered past and to reclaim an alternative future”.

Sewall doesn’t. “‘Before Yesterday We Could Fly’ comes from nowhere and no time” and so is “not really a period room”, he moans, with the irascible puzzlement of Abe Simpson in headphones. Oculus. Apparently he didn’t get the memo published on the Met website: â€œUnlike these other spaces, this room rejects the notion of a historical period and embraces the African and African diasporic belief that the past, present and future are interconnectedâ€¦â€ He is scandalized by what he considers to be the flagrant contempt of conservatives for “historicism”, denouncing them for “having given up their confidence” and “to have abused their artefacts”. None of the objects I saw in the Afro-Futurist period room, from the Dahomean royal staff to 19th-century Venetian glassware, to Kongo’s studded “power figure” and William Cole’s “Shine” ( 2007), a witty exercise. in the afro-surrealist DIY that smashes a bunch of shiny black high-heeled shoes into the eerie likeness of a Cameroonian mask, seemed particularly abused. Of course, for Sewall any use other than the respectful “display of worthy artifacts in context” is abusive.

No surprise there: the Conservatives want to keep. If the dull period room recreating the 18th century room of the Sagredo Palace, with his putti frolic in the dark, is the hill you want to die on, be my guest. But if you value history, shouldn’t you value all stories? Yet Sewall begins his examination by rolling his eyes at the grotesque (for him) notion of an “Afrofuturist period room” that “turns a 19th century interior into a future speculative home” of historically oppressed blacks “and pours contempt, a few paragraphs later, on the hall’s â€œtearful and semi-fictional backstory of historical injusticeâ€.

He doesn’t put â€œhistorically oppressedâ€ and â€œhistorical injusticeâ€ in ironic quotes; he doesn’t have to. Its readers will provide them. Far right and, if I know the Spectatorpredominantly white, they share Sewall’s indignant contempt for “the zeitgeist,” as he calls it, as some in white America begin to confront the racism, both personal and institutional, that is part of his DNA. this nation. For Sewall and his readers, the very idea of â€‹â€‹”historically oppressed blacks”, in this best of possible post-racial worlds, is so much of a “whiny, semi-fictional” liberal bunkum.

Ceding a square inch of the culture war battlefield – say, a small room at the Met – to a hopeful myth that rewinds the demolition of a black community and imagines a more radically empowered future for its people is one[ing] Ã  la vogue Today â€for racial justice. From this narrow, parochial perspective, an Afro-Futurist period hall can be nothing more than a plan to “provide a moment of racial learning for as many museum visitors as possible” – clearly a bad thing – or, better yet, an “anti-historical fantasy” in the “Disneyland of social justice”, like, you know, the Jungle cruise, with its African headhunters.

But what really ends it is the conservatives’ “reckless shift from preservation to political message.” It’s quite rich, coming from the Antonin Scalia of cultural commentary. Sewall is nothing if not a rank ideologue, through his media appearances as an expert face of the American Textbook Council – an innocuous sounding â€œindependent and non-profit research organizationâ€ launched in the 1980s and funded by ultraconservative foundations like part of a far-right strategy push back multiculturalism and any consideration of the historical legacy of white supremacy – decades of paleoconservative diatribes on “the LGBT lobby, “transsexuals” (who are, he implies, “mental illness“), the” calculated and cynical “indignation of Black student “race hustlers” “mau-mauing” UCSD administration, and the trauma of “White Americans, endlessly harassed, urged to renounce their heritage and confess ancestral sins“By” the inquisitors of diversity “.

Sewall wants to make the Met even better. Under the leadership of the new director, Max Hollein, â€œanti-European activism and prejudiceâ€ is on the rise. Breaking away from the historic lily whiteness of the Met’s curatorial staff, Hollein hired Denise Murrell, who is African-American, for the position of Associate Curator for 19th and 20th Century Art. (That makes three out of around 200 full-time curators who identify as African-American – further evidence of Hollein’s brazen “anti-European bias.”) More alarmingly, he commissions works from artists of color: sculptures bronze figure of Afro-alien women with lip plates and cyberpunk headgear, â€œThe NewOnes, will free Usâ€ (2019); â€œResurgence of the Peopleâ€ (2019) by Cree artist Kent Monkman, a high-camp broadcast from Emanuel Leutze’s â€œWashington Crossing the Delawareâ€ (1851) which replaces Washington’s soldiers with a cargo of Native people and displaced migrants and the general himself with the fluid, high-heeled alter ego of artist Miss Chief Eagle Testickle, whose name alone is enough to make Sewall look great.

Sewall longs for the days when Napoleonic director Philippe de Montebello kept an aristocratic eye on the prowl for outbreaks of political correctness and postmodern intrusions across the border between high and low culture, “worthy artifacts” and “l ‘current art’. But those days are behind us, and “mau mau” and “trannies” – terms that mark the user, at this late date, like a nutcase or a troll – are inside the doors.

Right-wingers like Sewall will have to take courage in the Churchillian stoicism they still advocate and resign themselves to the decline of the Met – another â€The burden of the white man, heroically endured.

This week, America’s only LGBTQ + Historic District, three Asian-American Modernists, Ai Weiwei on Reclaiming the Art of Capitalism, Thanksgiving and Genocide, and more.

For the artist, history is not content to repeat itself, but soars, stammers, stops, creeps in on itself.

Fei Li knows that a rapprochement between worldviews and the customs of China and America is unlikely.

Sentimentality would creep into the artist’s late evocations of remembered childhood scenes, just like idealization.