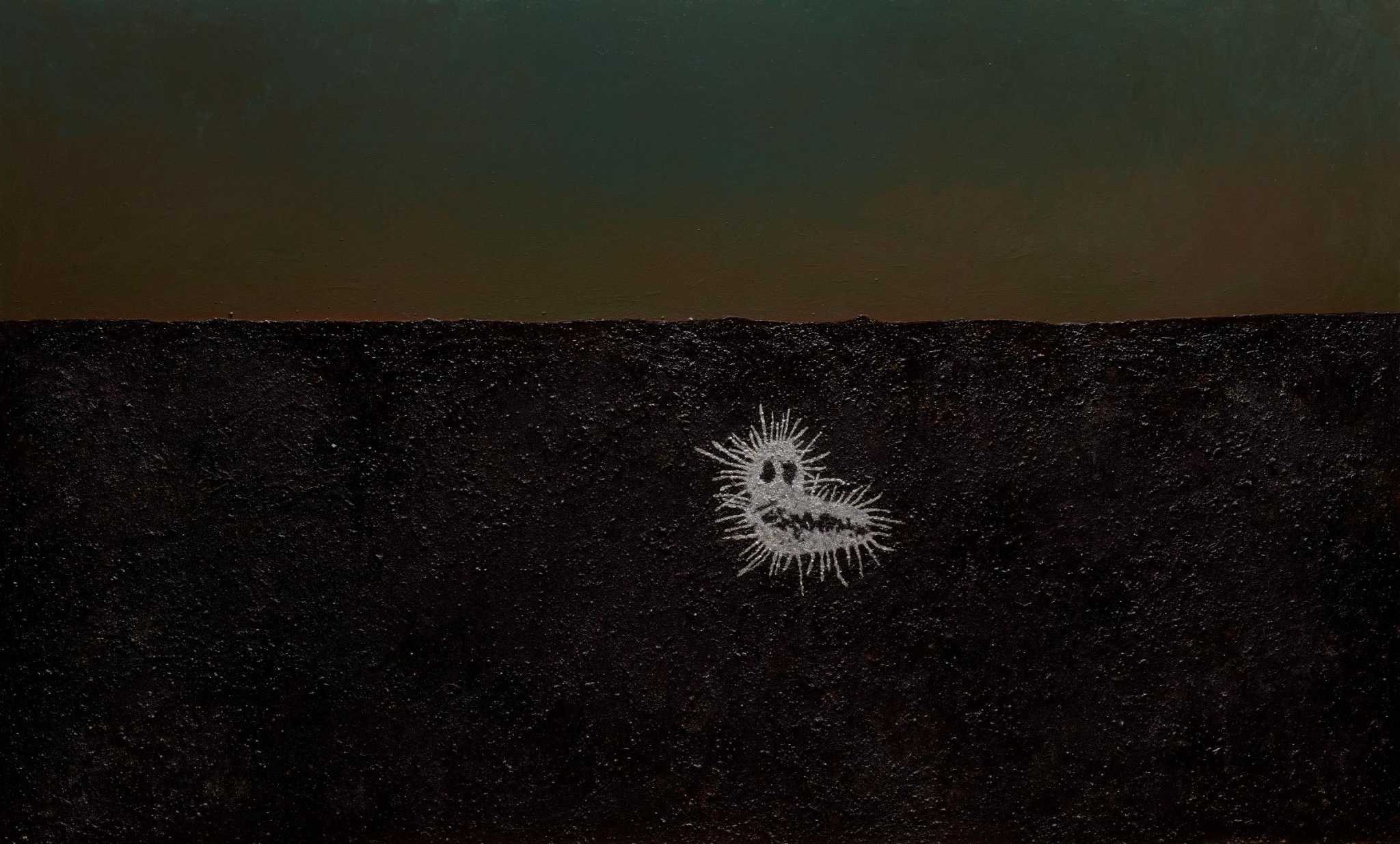 Or: In “Contemporary Artists in Houston from the Collections of William J. Hill and the Museum of Fine Arts of Houston” at the Glassell School of Art

To be or not to be an artist?

That was never really a question for Earl Staley, who still paints prolifically more than 50 years after arriving in Houston for a teaching position at Rice University.

The 12-foot-long â€œLandscape with Skullâ€ was created in 1974, but it looks like it could have been done yesterday by someone with a Gothic sensibility from the south of the border. Staley calls it one of his “dirt paintings”. The grain mixed with the black paint, creating a rich texture, is vermiculite, a material recommended at the time by Staley’s pal Harvey Bott, who also still paints.

The glittery cow skull is the only figurative element in the all-black wasteland, under a menacing green sky with just a hint of a fiery orange horizon. Very few of Staley’s other paintings are this austere and minimal, and stylistically they are everywhere, with references to cubism, surrealism, and classical landscapes.

Skulls, however, are still one of his favorite icons, perhaps self-reflective imagery similar to Picasso’s bulls. They relate in part to his childhood years in the 1940s as a Boy Scout of Oak Park, Ill., Who loved Native American traditions, and later the landscapes of West Texas and from New Mexico.

Maybe Staley imagined the skull above the ground, but I like to read it as buried, because, well, is it ironic that this vision of underground mortality put it, for a while , on top of the world?

“Landscape with Skull” appeared at the Whitney Biennale in 1975, and Staley’s star continued to rise for more than a decade after that. His work appeared in a landmark New York exhibition, “Bad Painting,” in 1978. He won the Prix de Rome in 1981, giving him a four-year stay in Italy at the American Academy, where he breathed the influences of classical art. and mythology. He has had several solo exhibitions at the Museum of Contemporary Art in Houston and has shown his work in other museums and galleries across the United States. Paint â€, Staley was also showing at the Venice Biennale.

But tastes have changed and collectors have moved on. “Collision,” Pete Gershon’s next book on the booming and flourishing years of the Houston art scene in the 1970s and 1980s, features a quote from Staley’s diary that describes his style of painting: “It’s rough, simple , pretentious in his honestyâ€¦. My technique is to have none. Aesthetic? Forget it, I don’t give thrills.

You could say that the sparkle of “Landscape with Skulls” is quite exciting. And Gershon, who put on this show at the Glassell in conjunction with the book, cleverly placed it next to a more lyrical, almost monochrome Texas flat landscape by John Alexander, painted the same year. (The show is terrific, also featuring stellar works by Richard Stout, Dorothy Hood, Dick Wray, Luis Jimenez, and other stage giants from the 1970s and 80s.)

In recent years, Staley has cut out old canvases to create collage paintings as a sort of â€œepic memory card,â€ and he has recently exercised his brain in a different direction by painting small portraits of people from Houston’s art community.

â€œI would love to be able to sell paintings, but it’s so difficult,â€ he told Kay Sarver in a recent video. “People prefer to buy a pair of shoes.”