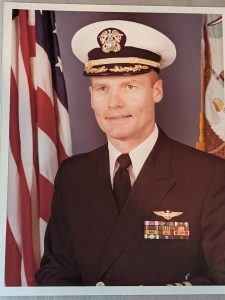 Austin was born January 20, 1940 to Demus and Evelyn Chapman and raised on Howard Gap Road. At Tryon High School, Austin distinguished himself as the Tryon Tigers full-back and was elected to the All-Conference Skyline â€œAâ€ team. During that regular season, Austin has scored 112 points on 18 touchdowns and four conversions, even hitting 5 touchdowns in a single game. Austin also distinguished himself in other ways, serving in his church, the Beta Club, in the school newspaper, as senior class vice president, and graduating from the 1958 Salutatorian class. .

Austin secured a post at the United States Naval Academy in Annapolis, Maryland, where he served as a battalion commander during his first class year and earned a Bachelor of Science degree with the class of 1963. After being Appointed ensign in the United States Navy, Austin trained to fly at Pensacola, Florida and earned his golden wings as a jet pilot in February 1965. In his first squadron, the VA-56, Austin Chapman received the Britannia Award. as the 1956 Naval Air Training Command Flight Student of the Year. Austin first flew the A-4 Skyhawk, then the A-7 Corsair, and eventually was able to fly almost every Navy inventory planes, including helicopters. Later in life, Austin (Call Sign “Red Fox”) would say that his 30 year career in the US Navy allowed him to live out all of his childhood dreams, as he served in many air force posts. carrier based, attended Naval Post-Graduate School in Monterrey, Calif., where he received his master’s degree in operations research and held OPNAV and Joint Staff positions.

During his 30 years of military service, Captain Austin Chapman carried out 227 combat sorties in Vietnam, carried out more than 1,000 aircraft carrier landings, made 8 overseas deployments in all geographic areas of operation, commanded 3 aviation units (one squadron and two Carrier Air Wings), and served as director of three main staffs. Austin has traveled the world as a personal assistant to the chief of naval operations, was a negotiator of international treaties and was director of the Naval Institute Press. He has also won 11 personal medals, including the Legion of Merit, the Meritorious Service Medal, the Air Medal, the Navy Medal of Honor, and various service and campaign medals.

After retiring in 1993, Austin Chapman returned to his hometown of Tryon, where he lovingly began to rebuild, remodel and renovate a home in Gillette Woods. He became active with the Holy Cross Episcopal Church, which he attended in high school, and served in the sacristy. He was also vice-president of the Polk County Community Foundation and president of the Gillette Woods Homeowner’s Association. As a member of the board of directors of St. Luke’s Hospital, Austin was named a member of the Second Wind Hall of Fame. Austin was elected to Tryon City Council in 2007, even for two years as mayor pro tempore. He has also volunteered with the Children’s Theater Festival and the Blue Ridge Bar-B-Que Festival and served as a Cub leader.

Austin loved Polk County, the mountains and Tryon, North Carolina. No matter where the Navy sent him he carried Tryon in his heart and he truly believed that the only good reason a person should leave such a beautiful place was because his country had asked him to. He loved spending time in his basement â€œmaking sawdust,â€ his modest term for creating beautiful furniture, one piece of which was featured in Fine Woodworking magazine. Most of all, Austin loved his family.

Austin was predeceased by his parents, Demus and Evelyn, his two sisters, Ann Chapman (Murphey) and Jane Chapman (Strong), and his first wife for 26 years, Anne Lynne Holcombe Chapman of Spartanburg, SC. He is survived by his wife of 23 years, Caroline Moore Chapman of Tryon, his daughters Lynne Chapman Mandell (Robert) of Pace, FL and Susannah Robinson (Kris) of Jacksonville, FL, and his son Thomson Flynn Moore Chapman (Jordan) from Washington. , DC Additionally, Austin leaves behind 9 grandchildren (Gentry (Rob), Finley, Effie, Tucker, Harris, Toby, Tanner, Sarah and Luke), cousins, nephews, nieces, great-nephews and great-nieces, as well as countless friends, squad mates and colleagues who have been positively touched by this good and honest man.

The funeral will be on Saturday at 2:00 p.m. at the Church of the Holy Cross, 150 Melrose Avenue in Tryon with a reception to follow.

In lieu of flowers, the family asks you to consider donations to the Wounded Warriors Project (woundedwarriorproject.org – Honor & Memorial Donation) or the Tunnels to Towers Foundation (t2t.org).

An online guest register is available at mcfarlandfuneralchapel.com