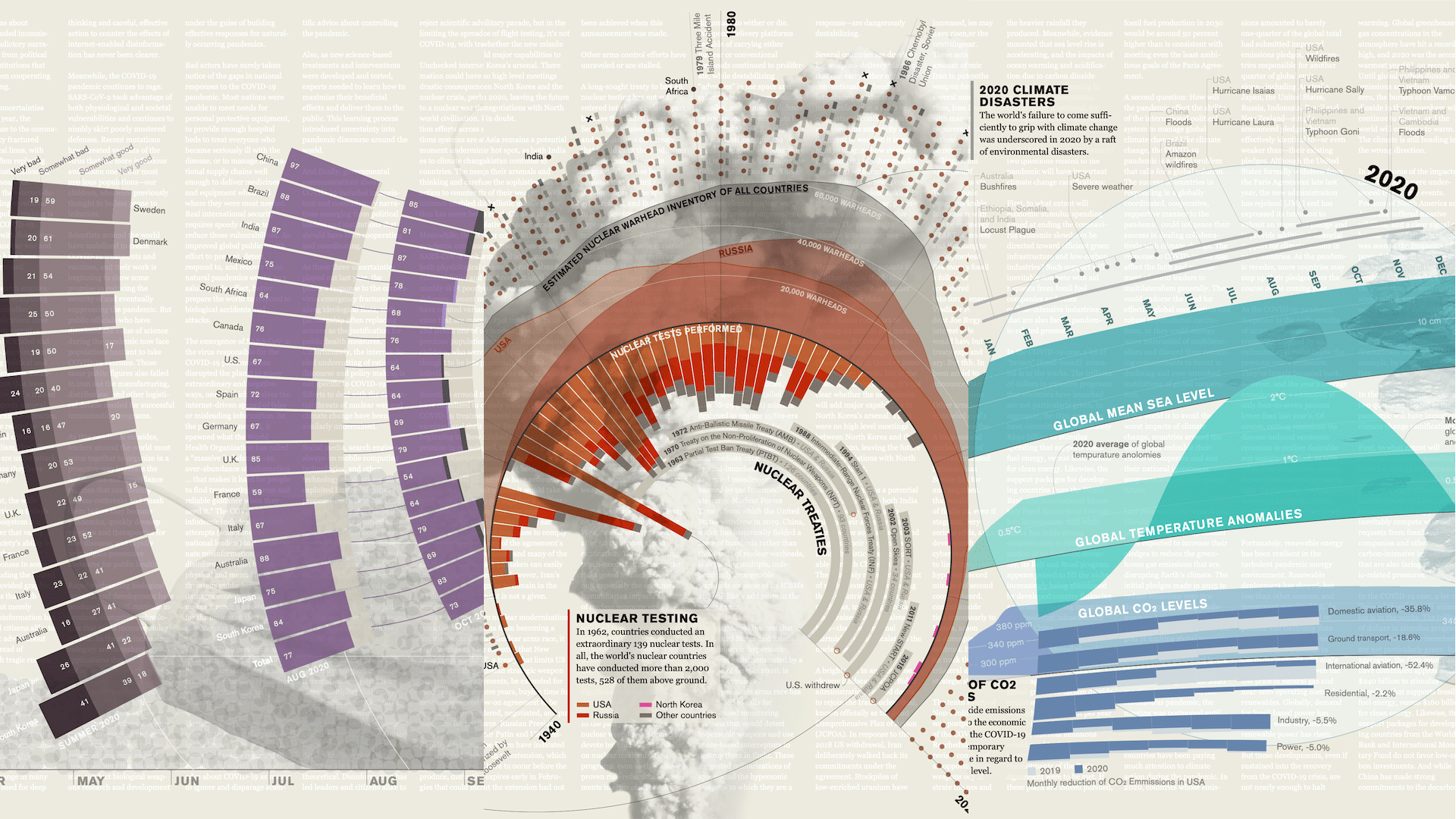 Best of the Bulletin, 2021: Beyond Words

A photograph of a giant nuclear jet engine; a map of thousands of chemical sites on the way to rising seas and storms; an endangered logo symbolizing recovery from nuclear disaster – these were some of the unexpected visuals that complemented the word written on the Newsletter website this year. Here are more examples of how we literally looked at existential threats in 2021:

Every year on Bulletins Doomsday Clock’s announcement grabbed the world’s attention, and 2021 was no different. When the White House changed occupants in January, the clock stayed at 100 seconds before midnight, a reminder that even with less chaotic leadership, the planet remains at risk from nuclear, climate and other natural disasters. human rights, including the world’s persistent failure to tame the Covid-19 pandemic. This year, the company behind the current Doomsday clock design has created three new designs that capture these existential risks in graphic form. These catastrophic data visualizations show at a glance the threats that have driven the hands of the clock since 2012.

Another graphic design effort has been the focus of Julian Hayda’s gaze on recent Chernobyl rehabilitation efforts. Since suffering the world’s worst nuclear accident in 1986, the power station, along with the vast radioactive exclusion zone that surrounds it, has become an unlikely tourist destination tainted with crass offerings from gift shops commemorating the disaster, like phosphorescent condoms. . But a new partnership between the Ukrainian government and graphic design agency Banda has produced an unusual forward-looking representation of Chernobyl’s transformation: a logo that is gradually disappearing as the region’s ecosystem recovers.

This year the Newsletter presented fascinating in-depth investigations to our readers on topics such as the gargantuan budget for seemingly unnecessary new nuclear weapon systems; the unrealized but still unbelievable plans of the United States to test nuclear devices 100,000 times more powerful than the Hiroshima bomb; and the dangerous vulnerability of Houston’s endless toxic landscape. The photos and graphics accompanying these captivating reports help to make these hard-to-imagine excesses more concrete.

Why is America getting a new $ 100 billion nuclear weapon?

Editor-in-Chief Elisabeth Eaves has traveled through several western states, from Montana to Utah, to take a closer look at military and defense industry facilities that help maintain the states’ ground nuclear deterrence- United – and find out exactly what (and who) is driving the Pentagon’s colossal budget for its first major upgrade to the intercontinental ballistic missile system in over 30 years.

A supernatural spectacle: the untold story of the world’s biggest nuclear bomb

On the eve of Halloween 1961, the Soviet Union tested the most powerful nuclear weapon ever unleashed, “Tsar Bomba”. Images taken above the clouds above Ground Zero reveal a fireball indistinguishable from the rising sun. The test has been widely condemned as dangerous and destabilizing, particularly by the Kennedy administration. But decades later, historian Alex Wellerstein uncovered new documents detailing the varying enthusiasm of the US government for building the biggest bomb possible. Reading formerly classified reports combining bureaucratic banality with Dr. Strangelove’s zeal is fascinating and gruesome, as is watching footage and footage of these bombs, both the devices themselves and their potential explosive impact.

Gathering storm: the industrial infrastructure disaster that threatens the US Gulf Coast

Global warming, which threatens to raise sea levels significantly over the next century, has already been conclusively linked to the increasing severity of storms and hurricanes in the Southeastern United States. In this Newsletter Exclusive reporter Tristan Baurick worked with MIT’s Center for Global Change Science to analyze flood risk data from Texas and Louisiana that fills gaps in official U.S. government flood projections and connects this risk to thousands of sites where potentially hazardous chemicals are stored. Many of these facilities are highly vulnerable to flooding caused by storm surges and precipitation. Our interactive map identifies each at-risk chemical facility in both states, details the toxic materials stored at each site, and demonstrates that the threat extends inland far from the Gulf Coast.

Photo essay: How do humans make sense of the bomb?

Artist Robert Del Tredici showcased a powerful selection of his work in this photographic essay on decades of nuclear science and weapon development, from wide-angle close-ups of famous scientists to microscopic close-ups of fissile material. It’s oddly heartwarming and disarming to see portraits of shriveled wartime nuclear power fighters like Edward Teller juxtaposed with photos of children learning about atomic science for the first time.

This year, editor-in-chief Susan D’Agostino unwittingly became the publication’s first in-house zoologist. She discovered surprising links between nuclear concerns familiar to our readers and less common ones. Newsletter topics like whales, jellyfish, snakes and even bees. These stories, and many others, all came together in this interactive world tour of unusual encounters between animals and nuclear power.

Returning to the end with the Doomsday Clock, this was one of the first images ever released by the Newsletter when it appeared on the cover in 1947. This year the Bulletins The covers continued to illustrate our bimonthly magazine’s themes, from the election of Joe Biden and the green-collar economy to pandemic defense spending and the fight against disinformation.

Inflation will subside by the middle of next year: AHL – Journal

The best of Bulletin 2021 magazine