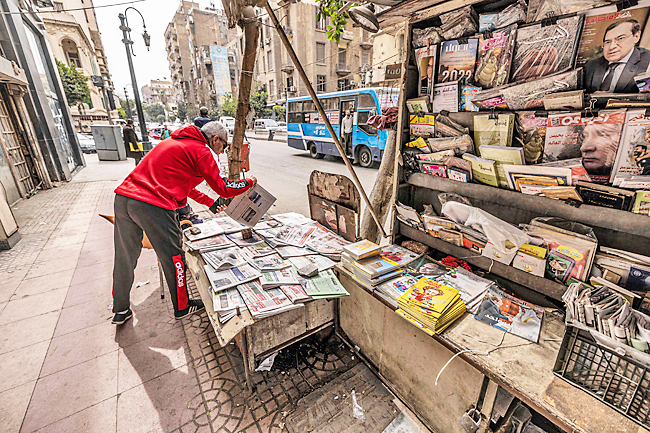 As elsewhere in the world, the Egyptian print media is in steep decline, with news mostly moving online and readers tending to stay informed via their smartphones.

In Egypt, a country of 103 million people, the trend has been particularly marked since the government, which publishes most newspapers, also raised their prices.

“Nobody buys newspapers anymore, especially since they have become more expensive,” said a saleswoman in her 50s known as Umm Mohammed, wearing a woolen shawl against the winter cold.

Critics also lament the homogeneity of the press in a country closely ruled by army marshal-turned-president Abdel Fattah al-Sisi, where censorship and self-censorship
are common.

The piles of newspapers and magazines in front of Umm Mohammed had barely shrunk all morning, she said, sitting at her kiosk in Cairo’s west Dokki district.

Three years ago the government raised the prices of daily newspapers by two to three pounds and weeklies by three to four pounds, citing more expensive raw materials and falling subscriptions. This has curbed the circulation of print in the largest country in the Arab world, where the average household income is around EGP 6,000 per month.

“People would pick up the evening paper and pick up a few other issues on the way,” Umm Mohammed said. “Now we don’t even have that.”

“There are cell phones everywhere. People who walk past my booth often ask, “Oh, are people still selling it, even with everything online?”

“It really upsets me. It’s our livelihood. What are we supposed to do?”

Microbus driver Tareq Mahmud, 44, stopping near the kiosk, said he had not bought a newspaper for 11 years.

“I stopped when I realized that the journalists I read in the newspaper every morning were the same ones I had watched on television” the night before, he told AFP.

“And I think there are many like me who stopped there.”

According to official statistics, Mahmud is correct: Egypt published 67 titles in 2019 – public, private or linked to political parties – compared to 142 in 2010. Circulation fell by around half, from more than a million copies to 539,000 over the decade.

Ahmad al-Taheri, editor-in-chief of the weekly Rose al-Youssef, a figurehead of Egyptian journalism for nearly a century, said the media needed to innovate, including in its circulation.

“We have to find new outlets,” he told AFP, suggesting new outlets in the pandemic era:

This is not a solution for Umm Mohamed who, after 18 years in the business, is considering retirement.

In the absence of a union or other support system, she, like other salespeople, recently entered into a modest pension plan with the public publisher Ahram Foundation.
But even this pension is not guaranteed.

The head of the National Press Authority, Abdul Sadiq el-Shorbagy, told parliament in January that the state press was in debt and owed more than $573 million in taxes and insurance.

News outlets are bleeding money because the online connection has yet to generate a profit for them, with most content offered for free and advertising revenue proving insufficient.

The editor of the private daily Al-Shorouk, Imad Eddine Hussein, deplored the “desolate state” of the press in Egypt.

All front pages tend to be nearly identical, reporting the same presidential speeches or ministerial announcements.

“It’s the same in every newspaper, so readers turn away from it,” Hussein said. “If it continues like this, it’s not just the state press that will disappear, private newspapers too.”