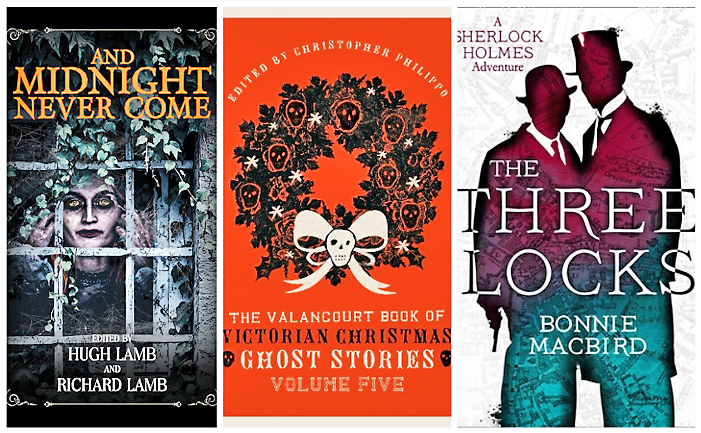 THE WASHINGTON POST – Let it snow! When the weather outside is dreadful, it’s time for ghost stories and classic mysteries – even if you only wrap them as gifts for lucky friends and family. Need some ideas? Just read on.

This latest in an annual series demonstrates once again that chills and fears still linger in the burnished pages of old magazines and Christmas albums. Philippo is reprinting two beautiful stories I’ve read elsewhere – My Brother’s Ghost Story by Amelia B Edwards and The Undying Thing by Barry Pain – but all of his other choices were unfamiliar to me. As James Skipp Borlase is represented by two stories, I decided to read them first.

The Dead Hand – subtitled A Tale of a Weird and Awful Christmastide – centers on a loving housekeeper, her unscrupulous lover, and the mummified hand of a deceased Catholic priest. After being “borrowed” for “some wicked and infamous purpose”, this bony appendage embarks on restless nightly wanderings, periodically emerging from its sarcophagus to “crawl along the wall like a large brown spider”, before rushing – “Flop, flop, flop” – towards an unhappy sleeper.

In The Wicked Lady Howard, a young beauty addicted to luxury marries for money and position. But consumed with desire and jealousy, her former lover angrily threatens the new husband with death “during the happiest hour of your life!” It duly happens, but then things take a strange and unexpected turn.

The late Hugh Lamb’s anthologies – Victorian Nightmares, Terror by Gaslight, and a dozen others – are beloved by aficionados of the Weird, in part for Lamb’s informative introductions to each story. This fall, Richard Lamb discovered that his father’s papers contained enough unused material to make up this posthumous collection, a typical assortment of Lambiens of forgotten writers (F Sartin Pilleau, ER Suffling), half forgotten (Hume Nisbet, Alice Perrin) and vaguely familiar (William Hope Hodgson).

In Waxworks, by AndrÃ© de Lorde, a good-natured young man who calls himself fearless, agrees to spend the night alone in a wax museum. It’s never a good idea. In Behind the Wall, by Violet Jacob, a pair of staring eyes, glimpsed through a crack in ancient masonry, portends the vengeance of an aggrieved woman – and long dead: “You kept me here for twenty years , but you won’t be able to hold me back – not then. I’ll come for you.

Beautifully crafted, this two-volume set is likely to cause considerable mental consternation.

While the little angel perched on your right shoulder chirps, “The perfect gift,” that mischievous red devil on your left will sly hiss, “Keep it yourself.” You know you want it. “

Fortunately, whatever you decide, someone will be extremely happy.

After all, Onions wrote many excellent stories in addition to his two notable anthologies: The Beckoning Fair One – a rival to Henry James’ The Turn of the Screw in its hallucinatory power – and lo (The Lost Thyrsus), in large part the British analogue of Charlotte Perkins Gilman’s feminist classic, The Yellow Wallpaper.

In the story of Onions, a fragile, bed-ridden young woman begins to hear, at first only faintly, the intoxicating sounds of Dionysiac revelry.

After Dickens, Chesterton – the apostle of tradition, paradox, and joie de vivre – seems the most Christmas of writers, and yet he is much more than a literary Kriss Kringle. There is ambiguity and obscurity at the heart of his Christian bonhomie, as shown by John C Tibbetts in his astute study of the writer’s strange tales, mysteries and science fiction.

Both critical and anecdotal, this multi-faceted appreciation underscores the widespread influence of The Man Who Was Thursday, the “impossible crime” stories of Father Brown and the larger-than-life author himself on, between. others, John Dickson Carr, Jorge Luis Borges, Ray Bradbury and Neil Gaiman. Tibbetts even adds a story from the Ignatius Press, which brought to print nearly all of Chesterton’s voluminous writings.

Looking for “a seasonal story of lore, family and murder?” Of course you are. In this ingeniously crafted short novel by a double winner Edgar, a young librarian is killed and an Army Ranger confesses to the crime. An open and closed case, right? Maybe not. As Professor Cameron Winter sifts through the evidence, he discovers terrible associations with his own disturbing past.

Harry Keating has written classic mysteries such as The Murder of the Maharajah, reviewed thrillers for The Times of London, served as chairman of the Detection Club, and produced several witty non-fiction studies, starting with Murder Must Appetize.

If you are a fan of Inspector Ghote’s novels or just want to understand how a great detective writer went out of her way for a living, add Sheila Mitchell’s biography of her much-missed writer husband to your list of Christmas.

Finally, you still can’t beat Holmes for the holidays. This year, three of the best Sherlockian pastiche writers, all members of the Baker Street Irregulars, have released new books. In Bonnie MacBird’s The Three Locks (Collins), the Grand Detective must solve a trio of mysteries involving the death of a magician, the drowning of a young woman and a sealed silver box. In The Return of the Pharaoh (Minotaur) by Nicholas Meyer, Holmes and Watson encounter archaeologists, murderous violence, and strange acts in early 20th century Egypt.

Notably, in Observations by Gaslight (Mysterious Press), Lyndsay Faye tells stories from the world of Sherlock Holmes. In Faye’s first tale, the length of a short story, The Adventure of the Standing Clocks, Mrs. Godfrey Nortonbetter, known as Irene Adler “of dubious and dubious memory”, again crosses paths with her enemy Baker Street favorite. Finally, to emulate Dr. Watson in The Adventure of the Blue Carbuncle, allow me to wish all the season’s compliments. Happy reading everyone, have a good night!