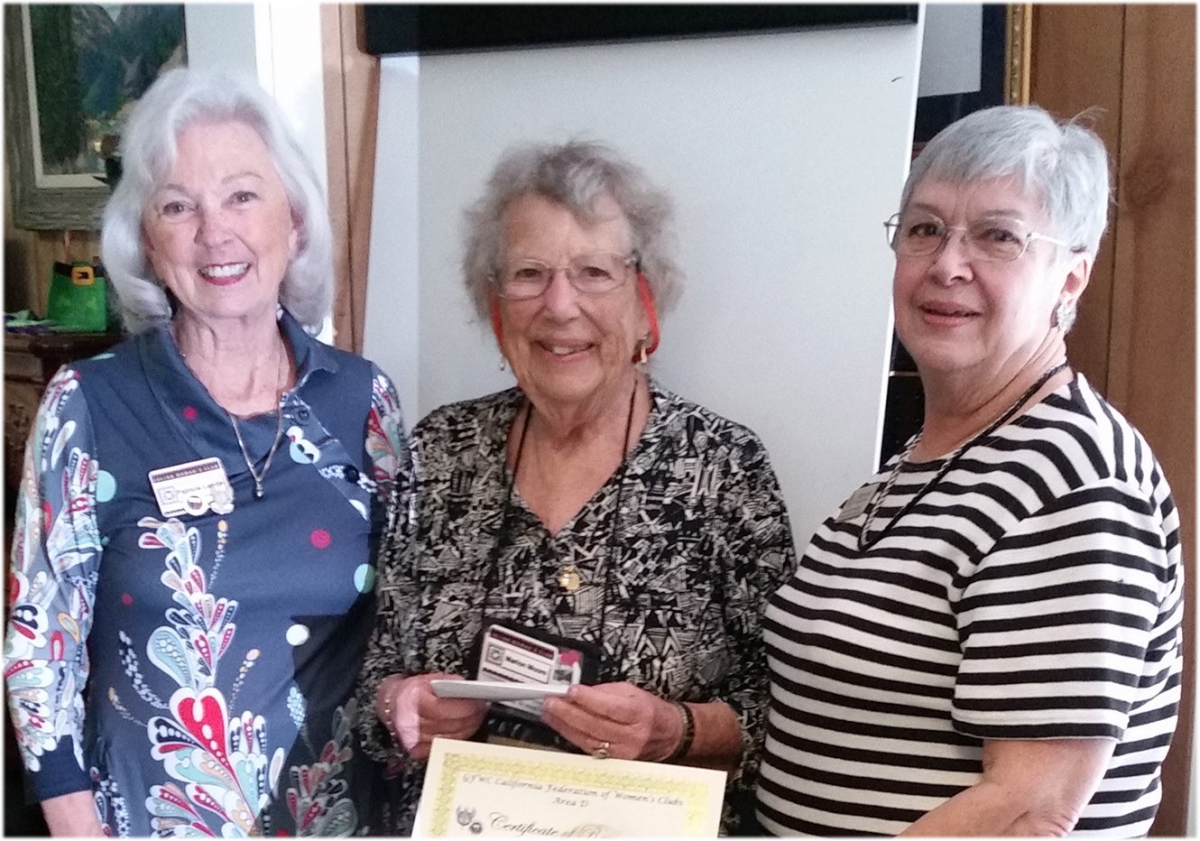 March 8, 2018 (Julien) – March 5e in a Luncheon Scholarship, the Julian Woman’s Club honored eleven women who have been members of the club from twenty to forty years old. Eight are past club presidents and several more have served as district and state officers of the California Federation of Women’s Clubs. They are truly exceptional women.

Recognition awards have been presented to: Janet Baker, Diana Garret and Barbara Mitchell for 20 years; Jan Mattias and Edie Seger for 25 years; Susan Fowler, Ruth Rabenberg, Diane Boyer and Norma Quirk for 30 years; Gig Ballinger for 35 years; Marion Moore for 40 years. Marion explained the reason she joined and remained a member of the Woman’s Club. The meeting was sold out with the husbands and daughters of the winners.

The club holds three Scholarship lunches every year. Donations received are used for scholarships for graduate students of Julian High School. But that only scratches the surface of what this amazing club and these amazing women accomplish every year.

The Heritage Quilt Show is a major event in the life of the community. A dedicated and enthusiastic group make a â€œquilt of opportunityâ€ under the direction of Eleanor Burns, a world-renowned quilter. The quilt is drawn on July 4the. The Quilt Show takes place at Julian Town Hall and is free to the public the last week of June and the first week of July. The show features vintage and contemporary quilts provided by local residents. It is a wonderful exhibition of colorful, artistic and historical drawings. Visitors come from the local community, state, nation, and around the world. It serves as a major fundraiser for our club with income from donations, the sale of raffle quilt tickets, and the sale of handmade items by club members. The 2018 Quilt Show will take place on Friday June 29e and july

1st until July 4e and is free to the public.

The The Eleanor Burns Show is both a performance and an instruction for quilters. Over forty years ago Eleanor Burns presented her first book “Quilt in a Day” and in doing so cultivated a revolution in quilt making. The Julian Woman’s Club is very fortunate to have this wonderfully sympathetic and famous quilt maker as a member. She put on her interesting, informative and humorous show on the first day of the Heritage Quilt Show 2017. There is always a lot of interest in her event, even among non-quilters. his 20

18 will highlight her accomplishments as she announces her retirement (not). The club is very grateful for his contribution. The 2018 Eleanor Burns Show will take place on Saturday June 30e at 11h00

The Julian Backcountry Quilt Trail is the first in Southern California, joining more than 130 quilting trails across the country. It is an art form that celebrates our history and heritage and promotes the economy by bringing visitors to Julian and the surrounding communities. A quilt trail is a driving route along which owners post painted wooden quilt blocks visible from the road. The Back Country Quilt Trail was established in 2014. There are now over 30 quilt blocks posted on Highways 78 and 79, within a 15 mile radius of Julian.

International Heifer is sponsored by local, national and international women’s clubs. In 2017, a raffle of outstanding artwork was held and the proceeds were sent to Heifer. They provide animals, seeds, technology and training to empower women, farmers and families to improve their livelihoods and standard of living. This creates a domino effect by requiring beneficiaries to pass on the first offspring or seed production to other families. The club is proud to participate in this exceptional organization.

The Julian Wildflower Show is a historic event that began in 1926 as an afternoon garden party and has grown into a much anticipated event each spring. â€œThe Good, the Bad and the Uglyâ€ was the humorous name chosen for the 2017 show. This event is designed to educate and delight tourists and community members with a rich botanical variety and diversity, from the mountains to the low desert. through the neighboring mesas. Three expert botanists and a photographer helped identify the flowers, provide images, and present information for the exhibits. The Woman’s Club partnered with the San Diego River Park Foundation and the Volcan Mountain Foundation for activities on the last day of the show. The 2018 show will take place at Julian Town Hall on May 4-6. The show is free to the public.

Pennies for the pines has been a Julian Woman’s Club project for so long that no one really remembers exactly how or when it started. Its goal is to plant trees where fires have stripped the landscape. Members who lived through the 2003 Cedars Fire and the 2007 Witch Burning fully support this project and are fully aware of its importance. Membership donations are forwarded to this organization.

The Apple blossom tea takes place on the second Friday in June, with seating in the morning and afternoon, serving over 100 guests from across the county. With its beautifully decorated tables in pretty pastels, delicious food and tea served in vintage-style tea cups, Apple Blossom Tea has become one of the most popular fundraising events hosted by the Julian Woman’s Club. . Donations for tea and raffle baskets donated by generous local merchants make this a successful fundraiser for the club. Apple Blossom Tea 2018 will take place on Friday June 8e, with seating at 11:00 a.m. and 1:30 p.m.

Apple festival allows the possibility of two events. First, there is an apple pie baking competition that is judged by chefs from local establishments. It was widely advertised and promoted on television along with the festival itself. Winners receive cash rewards. The pies are sliced, wrapped and sold at the festival held at Menghini Winery, along with additional pie slices made at Mountain Bakery. The 2017 event drew thousands of visitors, sold whole pies or slices of 200 pies and raised over $ 2,000 in one day.

The Visit of the holiday home is really a favorite start to the holiday season. Each year brings a different challenge. We had rain, wind and snow. In 2017, we had no electricity. Due to very strong winds, electricity was cut off in Julian and the surrounding area. Can you do a Home Tour without electricity? The answer is GOOD SR !! The members of the Julian Woman’s Club are smart, resilient, creative and persevering. This year, four homes and the Woman’s Club Historic Clubhouse itself were selected for the tour. The houses ranged from spacious and elegant to really tiny and they were all beautifully decorated. Home baked goods and handicrafts were sold at the start of the tour and the club made a big profit for this event. The 2018 holiday home visit will take place on Friday 14 Decembere.

The Julian 4th July Parade allowed the ladies to be driven in a 1926 Cadillac limousine (the same year the Julian Woman’s Club was established). The limousine was provided and driven by a member of the Julian Historical Society.

The goal of the Julian Woman’s Club is to support our community. The club recognizes that the need for education beyond high school is increasingly vital to finding employment, building careers and improving quality of life. Our Scholarship program is one of the most important ways the club serves this community and contributes to the success of our youth. In 2017, the club donated $ 7,030 in scholarships. In addition, donations from the club enabled two students from Julian to attend the Hugh O’Brien Youth Leadership program and subsidized a student for the Foundation of freedoms program at Valley Forge. These programs stimulate these students to strive for high ideals and give them the tools to achieve them. Finally, the Julian Woman’s Club donated to a dozen local charities.

The club has a number of retired educators and there is a love for working with children. Julien routes provided the opportunity to work with elementary school children by sharing talents and educating the children in their after-school program. Creating a wall quilt, having tea, learning to write haiku, and painting a cherry tree are just a few of the projects club members have organized.

Social events for club members are a priority. The club has a Reading Club which meets every two months and Hiking group which schedules a monthly hike in nearby interesting areas. You do not need to be a club member to join this group. The club also organized a visit to a winery and social gatherings at several local establishments. There was a Holiday Party between Christmas and New Years at Wynola Pizza, including a gift exchange. The goal is to provide members with opportunities to meet in casual and relaxing circumstances and to develop friendships by doing activities they enjoy.

The club requires its members to be active and participate in its events. It is the belief that this involvement is what attracts members (six new members joined in 2017) and maintains membership. Being involved also creates an environment to form new friendships and be very proud of the club’s accomplishments. Anyone wishing to learn more about the club, or join the club, is welcome to attend a meeting and learn more from our members. Our meetings always take place at 1:00 p.m. on the first Wednesday of the month, except in July and August (vacation time). You can also visit the site www.julianwomansclub.org.

For more information on membership, events and how to make reservations, visit www.julianwomansclub.org.

Publisher Lovatts steps in to save Nourish magazine