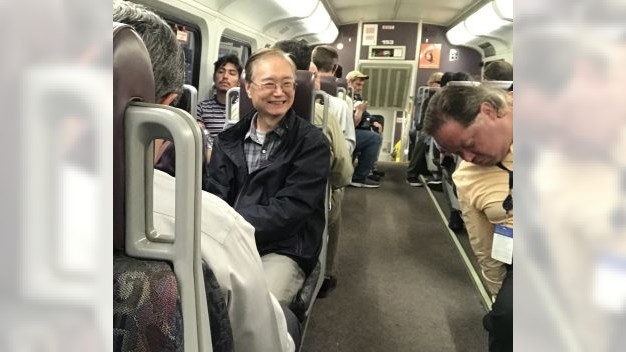 For Earth Day, which was Monday, Metrolink allowed everyone to travel for free, as did Metro, the LA transit agency, and some bus lines. With all the bad luck I had to work.

But I quit work earlier.

I was at the Claremont station for the 4:46 pm train to LA. A dozen others were also waiting. A white-haired grandmother said she took her 3-year-old granddaughter to Rancho Cucamonga and came back that morning, just for the ride, and now she was on her way to LA with other members of the family.

She is a grandmother who knows how to live.

On board the train, I relaxed with a novel, â€œThe Color of Memoryâ€ by Geoff Dyer. Not far from the trip, an assistant walked down the aisle. Often times they check tickets and, by reflex, I reached for my wallet, where I always hide mine.

And then I remembered: Oh, yeah, I don’t have a ticket – and today it’s okay.

At Union Station, we disembarked. Crossing the passage and then into the underground metro station, there were enough people to deny the idea that no one takes public transport.

At the turnstile, I hesitated briefly, having no Metrolink tickets to tap. But Metro’s turnstiles swung open. Everyone was on the same page today.

At the Pershing Square tube station, I got off the train, passing a man in his twenties on the platform reading a huge “War and Peace” paperback. At first glance it was only a few pages away, but it gets my respect.

I was meeting a friend from the Diamond Bar for dinner downtown. He took the Gold Line from downtown Azusa. Just in time, he was waiting outside the well-regarded Tex-Mex restaurant when I arrived.

The Ama bar was good as was the company, although its version of puffy tacos, a specialty, didn’t strike us as that special. It was a great outing anyway.

We were done quickly enough that we were back at Union Station in time for me to catch the 7:30 am Metrolink train home. This one was unusually full, every car of it.

My quad section, where four seats face each other, had three passengers, all foreigners. It was about as full as I saw a Metrolink train other than rush hour or trains going or returning from a special event.

It was an encouragement to sit up straight to avoid bumping your knees and to focus on the â€œColor of Memoryâ€. Going back and forth, I had 50 pages.

This was the first time Metrolink has offered free rides on Earth Day, and based on the response, it may not be the last.

There were 57,820 boarding schools, up 47% from the average week, with notable gains from 9 a.m. to 3 p.m., “as schools took advantage of free trips for school trips and many families took advantage of the school holidays. Spring went on day trips together, â€spokesman Paul Gonzales said. me by email.

During peak hours, trains were 85% full, even with additional cars. During off-peak hours, like when I was driving, trains that are typically more than half empty were up to 70 percent full.

Since most commuters buy monthly passes, the free ride day costs the agency $ 87,000. Gonzales called the experience “an investment to attract goodwill.”

He said: “Some of those people who tried us will probably stay with us for the long haulâ€¦ in which case it was a good investment.”

Of course, I ride Metrolink frequently. But I’m here for the long haul too. And maybe I’ll ask for time off for the next Earth Day.

Independent Bookstore Day is Saturday, with Cafe con Libros in downtown Pomona (280 W. 2nd St.) the only store participating locally. From 9 a.m. to 9 p.m., the non-profit bookstore and lending library will offer activities such as crafts, an interactive mural, poetry, music, and a book to hand out throughout the day.

Also, for a donation, a poem will be typed for you from 2 p.m. to 4 p.m. I am helping during this time and will be ready to sign my books, which will be for sale. Come on, bookstores!

From a window seat Tuesday afternoon in the Mi Cafecito cafe in downtown Pomona, I could keep an eye on Mayor Tim Sandoval and two police officers having coffee at a table across the way. of the glass. Suddenly a man with a baby stepped forward. Sandoval stood up and gave a kiss on the baby’s cheek. You always hear the clichÃ© about politicians kissing babies, but this is the first time I’ve seen the act. The man is one of Sandoval’s neighbors, and so is the baby, of course.

Journaling to Create Joy-Filled Recovery with the Day by Daybook