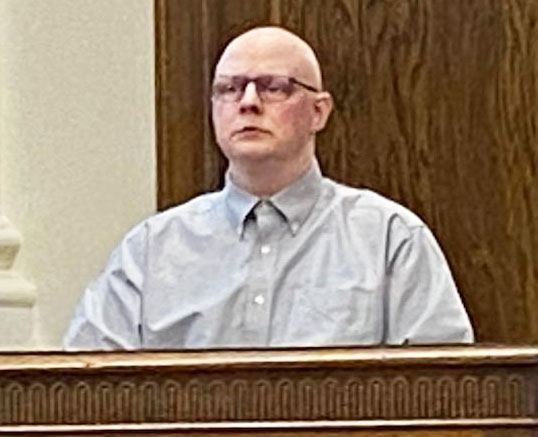 The prosecution called its last witness on Tuesday morning, day five of Keith Allen’s murder trial, and then the defense began making their case.

Deal is responsible for collecting data from cell phones and other electronic devices obtained during surveys. Deal said there was a large amount of text, images and social media contact on the cell phone provided by Torres’ ex-girlfriend Amanda Beall four days after the shooting.

The prosecution and defense teams took turns probing Deal with questions that supported their arguments.

Prosecutor Tanya Roberts-Connick asked Deal about Allen’s texts and voicemail messages that contained threatening statements about Torres, like the one where Allen warned Beall to stay away from Torres and another which read: “I swear to God that I will kill these mothers- f #% s.”

Alternatively, defense attorney Todd Lancaster questioned Deal about the texts and images Torres sent to Beall, in which he threatened both Allen and Beall.

Lancaster called two witnesses currently in Lincoln County Jail, both wearing handcuffs and county coveralls. They had recently been convicted of a felony. The first was Tietyss Dieter, who testified that he was previously assaulted by Torres and several others at a party, resulting in a trip to the emergency room and a broken nose.

On cross-examination, Roberts-Connick obtained testimony from Dieter that the party was in 2017, that Dieter told police he was attacked by eight people and did not know any of their names .

Gartner said he has been attending church and AA meetings since his incarceration in June 2021 and met Allen at one of the church services. Gartner said he wasn’t a fan of Allen initially, but “I forgave him for killing my friend.”

Lancaster called other witnesses to testify about Torres’ character, including Reilly Shakin, who dated Torres from September 2019 until January. 26, 2020.

Shakin said she clearly remembers their end date because she was beaten by Torres, which resulted in a trip to the emergency room. Shakin said Torres hit her in the face and strangled his dog when he became frustrated with receiving text messages.

McCarthy testified that on the evening of January 26, 2020, she became concerned when her daughter did not respond to her texts and called the police to perform a welfare check. At around 4-5 a.m., the hospital called to say Shakin was there and asking for his mother.

â€œYes, I would say yes, he is violent,â€ she said. Beall said she was aware of Amanda’s struggles with meth and that her relationship with Torres was abusive.

Adrian Garcia, who said he knew Torres, “for a brief time in my life,” testified that he saw Torres assault someone at a party around Thanksgiving 2017. When asked if he had one Opinion on Torres’ character, Garcia said, â€œHe came out as a violent person.

Kelli Forney, director of the Central Nebraska Community Action Partnership, where Allen worked as a case manager, testified about Allen’s work with the nonprofit organization. Allen was responsible for helping veterans seek and obtain social services. Forney testified that there were multiple video cameras where Allen worked and that she could monitor each of the sites she manages from her office at the nonprofit’s main location in Loup. City, in the Neb.

Asked by Lancaster, Forney remembers seeing Allen using crutches for several months before the shooting and knew he was suffering from illnesses. When asked by Roberts-Connick why Allen works with veterans, Forney said they like veterans working with veterans.

The last witness for the day and for the trial was the defendant, Keith Allen.

In response to questions from his lawyer, Allen said he suffered from physical ailments including fibromyalgia and sciatica, as well as alopecia (hair loss).

Allen was calm, collected, and consistent in most of his testimony. He got emotional 3-4 times and seemed to cry. He never seemed to be frustrated, agitated or angry.

Allen confirmed he was working for the association on the day of the shooting and said he met Beall while working there. Allen admitted that he had an intimate two and a half week relationship with Beall in February 2020. He said after the end they remained friends.

After the breakup, Beall occasionally spent time at Allen’s at 101 N. Chestnut, the site of the shooting.

Allen said he and Torres worked together at a car dealership in North Platte more than seven years before the shooting. Allen said he only knew Torres to exchange greetings at the time and had no further contact with him in the following years.

Allen also said that on the day of the shooting, he and Beall were returning from his job site to his home in his Ford Focus, which was driven by Beall, when they drove past Torres, who was driving a Chevy Tahoe, heading into the other direction. Allen testified that Torres immediately turned around and started chasing Allen and Beall, and someone yelled at them from the Tahoe.

Allen testified that the voice said “shoot your pussy” and “fight me like a man”.

Allen testified that when he and Beall entered the alleyway and made their way to his house, he had his Glock 21 45 caliber semi-automatic handgun in front of his window, holding it with both hands. Allen said he was moving the weapon up and down to try and warn Torres to back off.

As Allen’s vehicle pulled up in front of his residence, Torres stopped next to Allen, with Allen and Torres seated about 30 inches apart.

As Torres began to get out of his vehicle, Allen said he shot Torres, acknowledging that he shot nine times. Allen testified that he had no possibility of escaping, due to his physical limitations and because Torres’ vehicle had parked so close to him.

â€œI just wanted him to stop,â€ he said. â€œI didn’t want to kill him.

After shooting Torres, Allen rushed into his house, dropped the handgun magazine, loaded the slide to take the unfired cartridge out of the barrel, and placed whatever was associated with his gun. in a cupboard near the door. Allen then grabbed medical gauze from the same closet and a red backpack, returning to rescue Torres.

On cross-examination, Roberts-Connick determined that Allen was medically dismissed from the military after only completing advanced individual training, for a total of 5-7 months of service. When asked if he was proficient with guns, Allen replied that he was.

Once Allen finishes his testimony, the defense has completed its evidence, setting the stage for oral argument which will begin at 9 a.m. on Wednesday morning, October 13.

Pleadings should be completed by noon. Once completed, the jury of nine men and three women will begin deliberations.