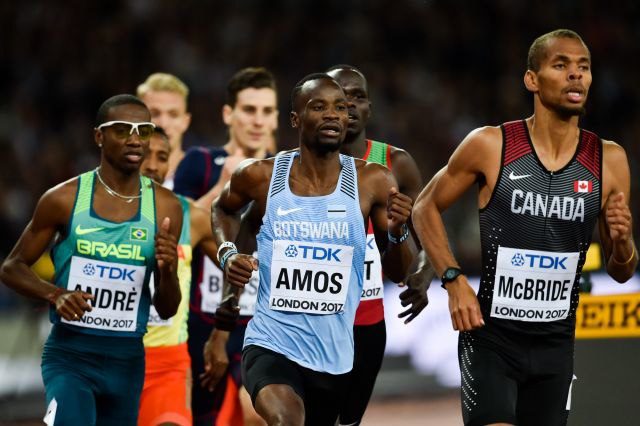 Third fastest 800m runner of all time, Batswana Nijel Amos has been provisionally suspended ahead of this week’s world championships after the 2012 Olympic silver medalist tested positive for a banned metabolite, the Athletics Integrity Unit (AIU) announced on Tuesday.

The drug found in the 28-year-old’s system was GW1516, which alters the way the body metabolizes fat and may increase endurance. An IAU press release says the World Anti-Doping Agency (WADA) has also warned it poses a health risk to athletes.

GW1516 was originally developed to treat obesity and diabetes, but is not approved for human use because it was found to be carcinogenic. It is prohibited in and out of competition, and not eligible for a Therapeutic Use Exemption (TUE). A 2019 USADA bulletin states that GW1516 is also sometimes known as cardarine or endurobol and has been found in some supplements, even though it is illegal. In 2017, there were 31 sanctions worldwide related to its use.

The IAU collected the sample from Amos during an out-of-competition test on June 4. Amos learned of the result as he prepared for the World Championships in Eugene, Oregon, where he was scheduled to compete in the 800m heats on July 20. He finished eighth in the 800m final at Tokyo 2020. At Rio 2016 he failed to come out of the heats.

The IAU has provisionally suspended Nijel Amos of Botswana with immediate effect after an out-of-competition sample taken from the athlete tested positive for metabolites of GW1516, a substance prohibited by WADA’s 2022 Prohibited List.
Press release: https://t.co/7ERRMkeFXK pic.twitter.com/F7RaSuday3

The IAU says the length of his suspension will be determined at a later date.