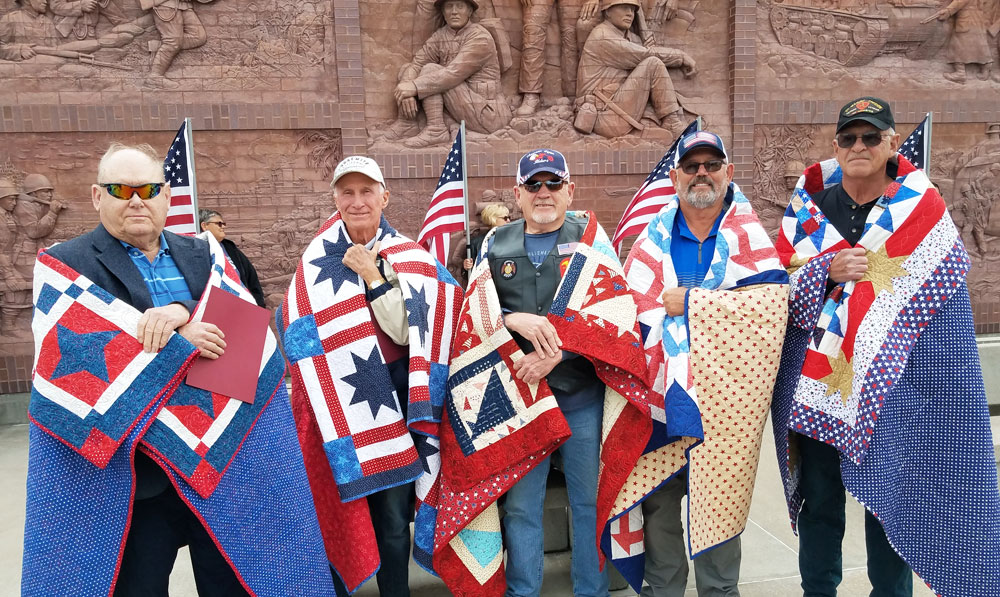 Quilts of Valor given to Vietnam veterans

Recipients are encouraged to use the quilts and take comfort in the gratitude of their compatriots for their service, sacrifice and bravery. Valor’s quilts are handmade in three layers by family, friends and supporters.

The quilts were presented at the 20e Veterans of the Century Memorial at North Platte.

Lincoln County Quilts have awarded 64 quilts since they premiered on Veterans Day 2019, and they plan to donate more quilts this year on Veterans Day.

Harry Miles served in the US Navy from September 1969 to April 1971. His basic training took place in San Diego, California. From there he was dispatched to naval support activity, to the mid-south base of Millington, Tenn, and then to the Great Lakes. Naval training station.

He was deployed to a base in Little Creek, Va., For riverboat patrol training.

Miles was aboard the tank landing ship USS Terrebonne Parish, affectionately referred to as the “T-Bone” by its crew. He served in the Mediterranean and Vietnam. He was responsible for four boats that transported and protected troops.

He was released in New York.

Her quilt was made by Judi Robinson.

Dallas Shearer was drafted into the Army in 1971, then enlisted in the United States Marines, where he served from 1972 to 1978, when he was honorably released as a Staff Sergeant.

He said a moment to remember was watching an AC-130 (Puff the Magic Dragon) light up the night like July 4th and thanking the Lord that he was on the same side.

Shearer received the National Defense Service Ribbon, the Vietnam Service Ribbon, an Expert Rifleman and Expert Pistol Medal, and he was chosen as the Neighborhood Marine. He received five meritorious promotions from E2 to E6. He was chosen for the school for officer candidates to become a warrant officer, but instead chose to return home to his family.

Her quilt was pieced together by Sandy Wyngaard, quilted by Chris Reinert and bound by Mitze Mueller.

Donald Barner of Wallace served in the US Navy from May 1969 to July 1973. His basic training took place in San Diego. He was on USS Richard E. Krause # DD849, where he was trained to be a sonar technician, among other duties. Its home port was Charleston, SC

Barner has served on five continents, including a NATO cruise in the North Atlantic and Vietnam in Southeast Asia. He received good conduct and a medal from Vietnam.

His memories include poverty in the counties he visited and how the poor were compared in the United States. He said it was an honor to serve our country and to be a patriot.

Montie Fuller volunteered for the draft in March 1967 and his basic training was at Fort. Bliss, Texas, attended infantry training in Gordon, Ga. He attended jumping school at Fr. Benning, Ga. Prior to his posting to 101st Airborne division. He was airlifted, with 10,000 men in the 101st, from Fort. Campbell in Saigon, Vietnam in December 1967.

Fuller returned from combat in December 1968 in the rank of Sgt. E-5. He received two purple hearts, three bronze stars, including two with V for Valor.

Fuller told the Bulletin then that he’s grateful for the quilt. He didn’t talk about his experiences except to say that at the time it seemed like a great adventure and his comrades got along well.

Her quilt was made by Marilyn McGahan.

Hazen: On the front

Donald Hazen served in the US Marines from 1967 to 1970. His basic training took place at the Marine Corps Base in San Diego, followed by machine gun training and qualification at Camp Pendleton, Calif. .

He obtained sniper status and was assigned to the Beaufort de la Marine base near the Isle of Paris, SC. One of his platoons had the highest qualifying score at the base at the time.

After jungle training in Okinawa, Hazen completed two tours of Vietnam, one in the front row and the other in rear support. In Vietnam during Operation Napoleon, Company C was strongly engaged by a reinforced North Vietnamese company. Hazen as the machine gun squad leader with the Third Platoon, which was the Assault Platoon. The second platoon was brought to a standstill by crossfire from enemy automatic weapons and small arms fire. Hazen took a machine gun, passed the point, and personally destroyed three enemy bunkers, allowing his platoon to sweep the remaining enemy positions.

Hazen was awarded a Silver Star for Courage under Fire and a National Defense Medal, in addition to Vietnam Service and Campaign Medals, Meritorious Unity Citation, Navy Achievement Medal, a meritorious pole, a combat action ribbon and a medal of good conduct.

While in Vietnam, he met his future wife Anne Southwell during an R&R in Sydney, Australia. Another bright spot for R&R came in 1969, when he was chosen in 1969 to represent the Maine Corps at the celebration of 100,000 American troops from Vietnam to take R&R to Sydney.

Hazen said he was only aware of the quilt presentation two days earlier. Her daughter-in-law gathered the information for the presentation, which was read aloud.

He said he hadn’t spoken much to his family about his service in Vietnam, preferring to move on with his life.

But the presentation apparently awakened memories and a willingness to talk about it.

He said he spent most of his time in the DMZ (Demilitarized Zone between North and South Vietnam) and that his unit was the first to dig in Khe Sanh, where the United States fought a battle. of five months against the North Vietnamese divisions.

He said he was in a shootout on his first night on duty in Vietnam and was reported missing to his parents on a ranch in the Sandhills. When the error was discovered, he was corrected by Ham to his parents to assure them that he was okay. He said he was never injured, but a sniper with an AK-47 narrowly missed him.

â€œHe didn’t take the wind into account,â€ he said. “If he had, my leg would be gone.”

One Christmas it was raining so hard that the men in his unit had to hold on to each other so no one got lost. Visibility was less than three feet, he said.

He said he never understood why he wasn’t hurt when others around him were. When he returned from an R&R, he discovered that his replacement had been injured and paralyzed from neck to toe. He died of complications.

Hazen said the comforter would keep him warm inside. It was reconstructed and bound by Earleen McNare and quilted by Sharlene Rodewald. Family and friends congratulated the veterans and took the opportunity to immortalize the event with photographs.

Anyone interested in nominating a veteran for this award can do so at www.qovf.org/nominations-awards

If you are interested in playing a role in the North Platte branch of the Quilts of Valor foundation, contact Chris Reinert at [email protected] for volunteer opportunities.

Rochester roller skaters have plenty to do in October