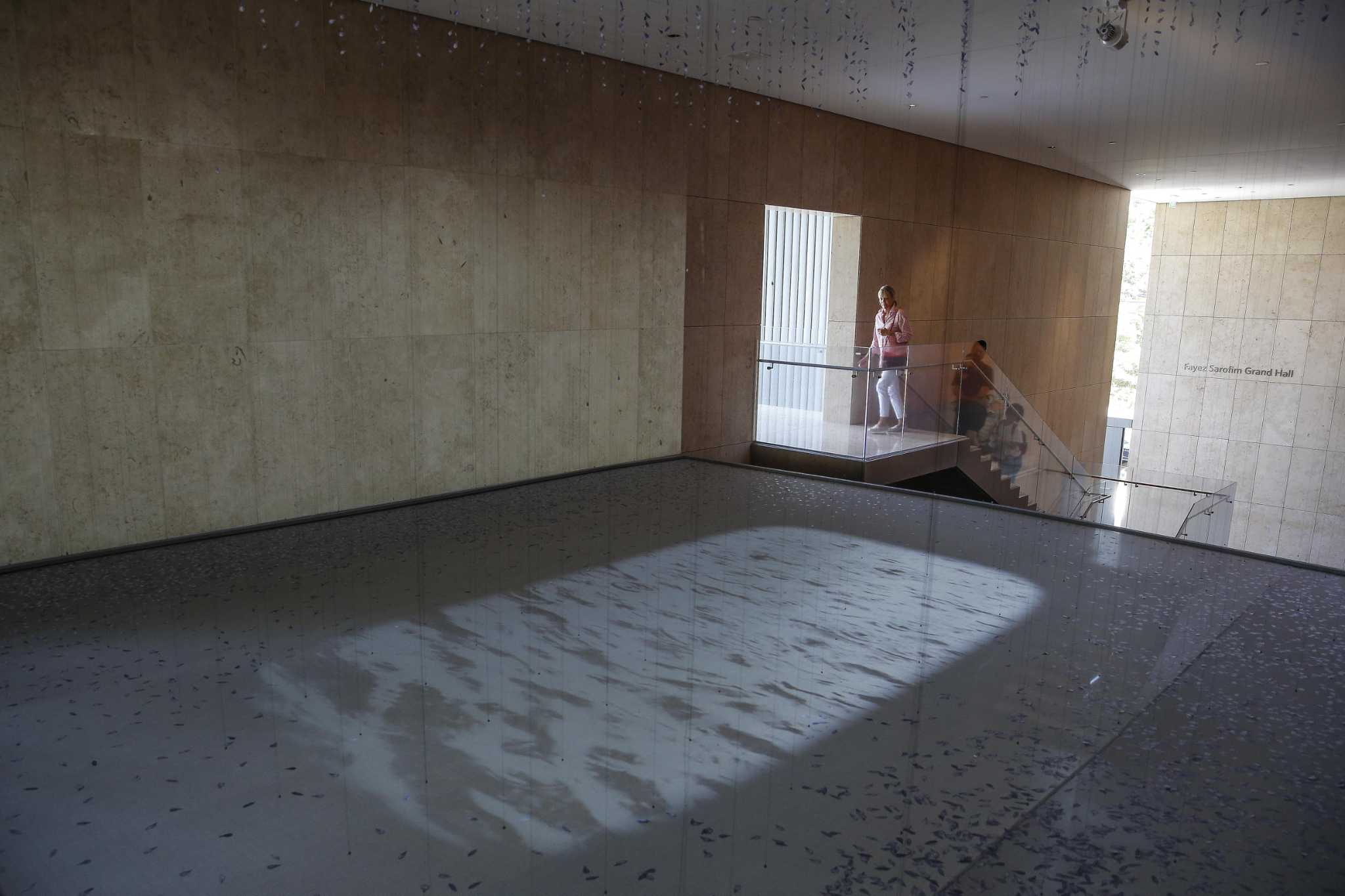 Why: Finally, someone figured out a way to make the grand entrance hall of the Asia Society a destination for art.

Yoshio Taniguchi’s immaculate building may be Houston’s finest architectural temple, but the long, narrow entrance hall, interrupted by stairwells and doorways, remains a challenge to activate as a space for the installations. There is no white wall to be found.

The installation is subtle, except for the canvas which cuts through the air like a false ceiling; this is the screen for a video projection of a gently undulating swimming pool. The rain falls towards the pool via another video projected on the adjacent wall, going from a squirt to a heavy shower before dissipating.

Tiny flower petals (individually screen printed on vellum and cut out) hang from the ceiling; thousands of them seem to have fallen and landed on the edges of the pool. In addition to the sensitivity to full immersion, even the glass-walled stairwell enclosure appears to be damp, covered in clear vinyl, and printed with condensation.

Do not try to identify the petals with lavender hues. Yoshida, who lives in Tokyo, imagined a cross between rain lilies native to Texas, blue caps and the famous cherry blossoms of Japan. She appreciates that rain lilies and blue hats reseed themselves naturally; her country’s now ubiquitous cherry blossoms do not, as the fruits and seeds were selected from it and have a lifespan of only 60 years.

This environmental message is also consistent with the one on storms and floods. Like Houstonians, the Japanese understand from experience the yin-yang dynamics of rain: we need it, and nature needs it, to survive; yet, too much can be destructive.

As Hurricane Harvey’s first anniversary approaches, Bray hopes Yoshida’s installation will inspire the conversation about “where we are on the weather continuum,” she said.

Yoshida said she didn’t realize until her first visit to Houston earlier this year that the city was so humid. She arrived during the January ice storm, amazed to see snow in Texas.

Giving free rein to the creation of an installation in Taniguchi’s spaces, she turned to her magical rooftop water garden, which sends periodic jets of “fog” out of the glass facade. from the second floor. She kind of wanted to bring that experience inside, she said. â€œBut, impossible! “

For nearly two weeks, around 40 university art students from Japan and Houston collaborated to help Yoshida build her work.

She comes from a family of woodcut artists. While his video installations advance aspects of the work, a pair of his more tangible and monumental woodcut panels are on display near the cafe. She riffs on the genre from the Edo period known as ukiyo-e, a term that translates to “floating world” but has multiple connotations.

Its large panels, each made up of a grid of smaller wooden blocks, are almost abstract renderings of storm gusts above watery horizons. Spotted blue and black by the inks, they have a powerfully menacing presence. They are beautiful and terrifying.