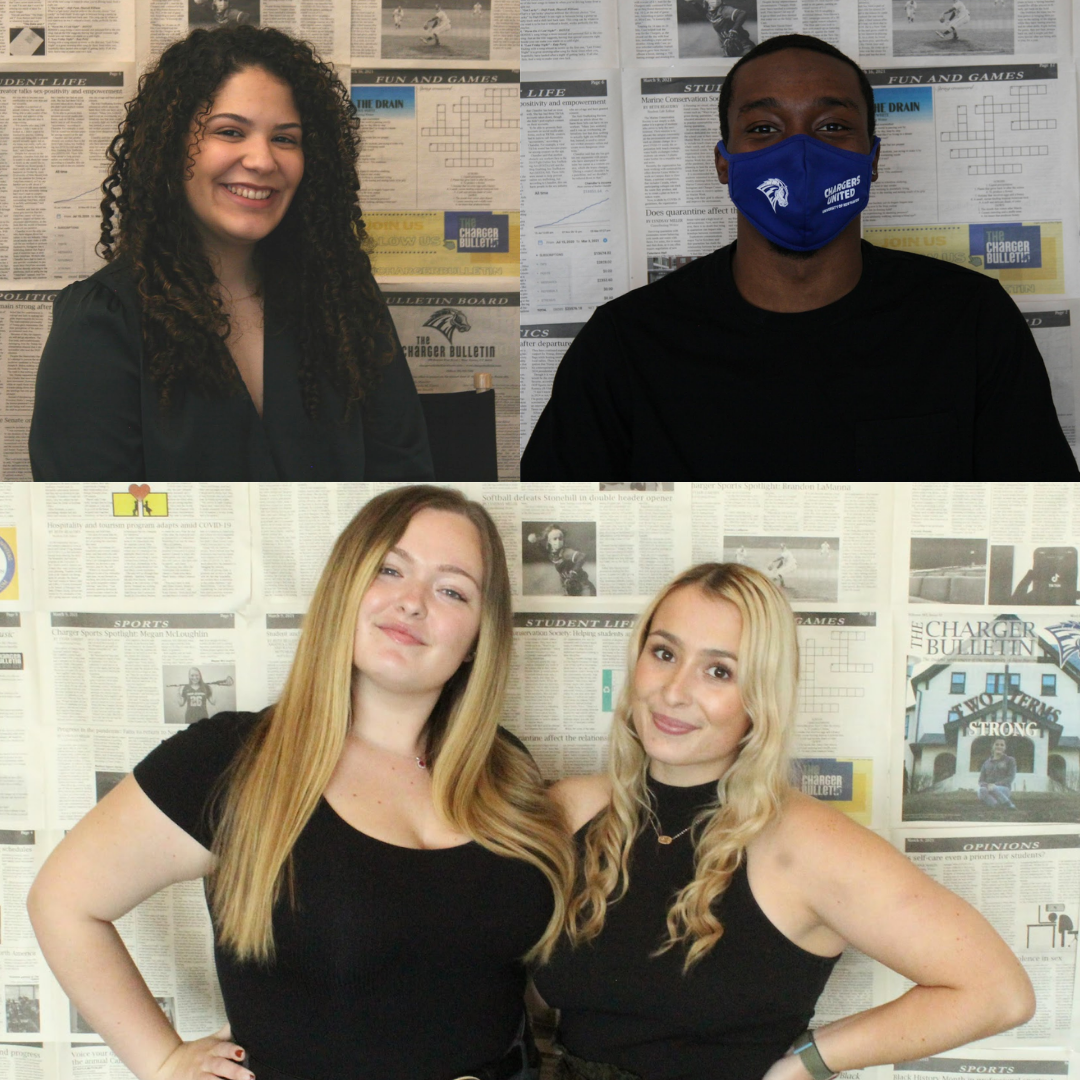 This winter, the Charger Bulletin is losing four core staff in various positions due to their graduation. We would like to take a moment to recognize each of their careers within the organization and thank them for all they have done for the Charger Bulletin.

Since her first year, Amanda Castro has been an integral part of the Charger Bulletin. Being a Communication: Major in journalism, writing for the newspaper was something she would naturally become a part of the day she entered campus. From her early days as a contributing editor to becoming the newspaper’s editor-in-chief, Castro has found ways to make a positive impact and bring humor and professionalism to the organization.

Beyond the Charger Bulletin, Castro is also the Executive Assistant (EA) of the Sigma Tau Delta English Honor Society (Alpha Sigma Theta Chapter) and the EA of the Latin American Student Association. She will also have a degree in political science and minor in English.

â€œI have been fortunate to make friendships with people who I know will last beyond my college degree,â€ Castro said. â€œI was also able to connect with my peers and teachers through conversations about my minors on topics related to each field. “

Another highlight of his stay at the university was the completion of his honors thesis project: Charger Bulletin Magazine. It served as a place for students to write long stories that couldn’t be printed on the paper side.

All of this experience will help her as she begins to enter the professional field of journalism, starting with her current position as a freelance digital journalist at the US Sun. She then hopes to take the next step and eventually work for a performing journalism magazine publication like The New Yorker.

“Because I joined [the Charger Bulletin], I became the editor and writer that I am today and I am eternally grateful for it, â€said Castro. â€œIt helped me target the area of â€‹â€‹journalism that I wanted to pursue. “

Castro has written over 50 articles and edited countless others throughout his work with the Charger Bulletin, constantly being a source of help for new writers joining the organization.

“I would say that [new writers] should be patient, â€Castro said. â€œThe key to dealing with all of this is to be patient in the learning process. “

Elisa D’Egidio has always given the newspaper a laid back voice that can make the group laugh with her sudden jokes. She was also a dedicated and hardworking member of the Charger Bulletin during her two-year tenure with the newspaper.

D’Egidio is one of the newspaper’s two student life editors and has a degree in Criminal Justice: Criminal Analysis with a Minor in English. She is also the Vice President of the Rotaract Club on campus, while working with the Center for Student Success and as the Assistant Multimedia and Social Media Coordinator for the Henry C. Lee Institute. Despite all of this, D’Egidio found the time to write several articles each week and help create graphics for the newspaper.

“I have been fortunate to have experienced a lot here,” D’Egidio said. “I’m really so happy with the way my experience turned out knowing that I did what I came here for and overcame every bump in the road.”

Over the past three semesters, the Charger Bulletin has been a big part of that experience. She joined in the fall of 2020 with a review of a Robin Williams documentary. Since then, she has written 50 articles in different sections of the journal, ranging from her field of student life to entertainment and sports.

â€œThe Charger Bulletin was a way for me to improve my writing and temporarily get into journalism,â€ D’Egidio said.

She also acknowledged her co-editor of student life, Kelly Adkins, saying that working with her was the real experience of having an amazing partner in the newsroom.

â€œI wish we had that extra semester to keep improving our section and having fun,â€ D’Egidio said. “Without my glittery twin companion, like [Charger Bulletin advisor Susan Campbell] told us, the paper wouldn’t have been what it is today.

Speaking of the fellow student life editor and Charger Bulletin’s â€œglitter twin,â€ Adkins is also graduating this month. She has been a contributor to the newspaper since her sophomore year, becoming an editor the following year and reaching an editorial position. Adkins is remembered for his frantic, super-late nights in the newsroom and his consistently positive attitude.

This is something she plans to pursue after graduation, as she will pursue a career in journalism while retaining her current position as a social media specialist at the Haydenfilms Institute. With a degree in Communication: Journalism, Adkins was introduced to writing articles early on in college.

â€œI wrote a few articles for my basic journalism classes,â€ Adkins said. â€œAnd after covering hard-hitting news like our college’s COVID-19 peak overnight, I knew I wanted to be part of passing information to students as quickly (and accurately) as possible.â€

Outside of the Charger Bulletin, Adkins is also a member of Alpha Sigma Alpha and the Women’s Ice Hockey Club. She said that one aspect of the university that she might have taken for granted was its sense of community and what it gives to students, “Charger Nation offers a lot of personalized attention and opportunities for growth.”

â€œGetting a college degree is a feverish dream,â€ Adkins said. â€œSo just have fun with whatever you do academically and socially. You won’t be in this community forever, so make the most of it while you can. “

For students interested in writing or journalism in college, the Charger Bulletin is a good place to start, according to Adkins. She said the organization offers a lot of rewarding work for anyone interested in it, so challenging yourself to explore the world of journalism is the best way to start.

Adkins did just that, writing dozens of articles for the newspaper and also appearing on Charger Bulletin News shows. For her, working for the publication gave her the opportunity to be in a professional newsroom.

â€œTo outsiders, the Bulletin may just be a weekly publication, but for us, this is the first time we’ve followed the codes and ethics of domestic journalists,â€ Adkins said. “I am very grateful for the advice of our Pulitzer Prize-winning advisor, Susan Campbell, as she taught me how to deal with real news and editorial situations.”

One of the creative brains behind the Charger Bulletin is Eldrick Greenaway. He is a video editor and technical director, where he produced promotional videos for the print and broadcast sides of the Charger Bulletin, in particular Charger Bulletin News (CBN). His work, including a video posted Dec. 2 to @unewhavencfms on Instagram and editing the weekly newscast, can be summed up in one word: professional.

He will graduate with a degree in Communication: Film Production and work for a post-production company Modern Post. At university, Greenaway is a member of Media Services, the Communications Club, and the Pompea College of Business media team.

All of this helped give Greenaway a family in college. He said that â€œwalking into this school with my best friend and leaving this school with a bigger familyâ€ is what will make him stand out the most.

â€œThanks for all CBN,â€ Greenaway said. “It was a great trip and I am grateful that everyone at CBN was a part of it.”