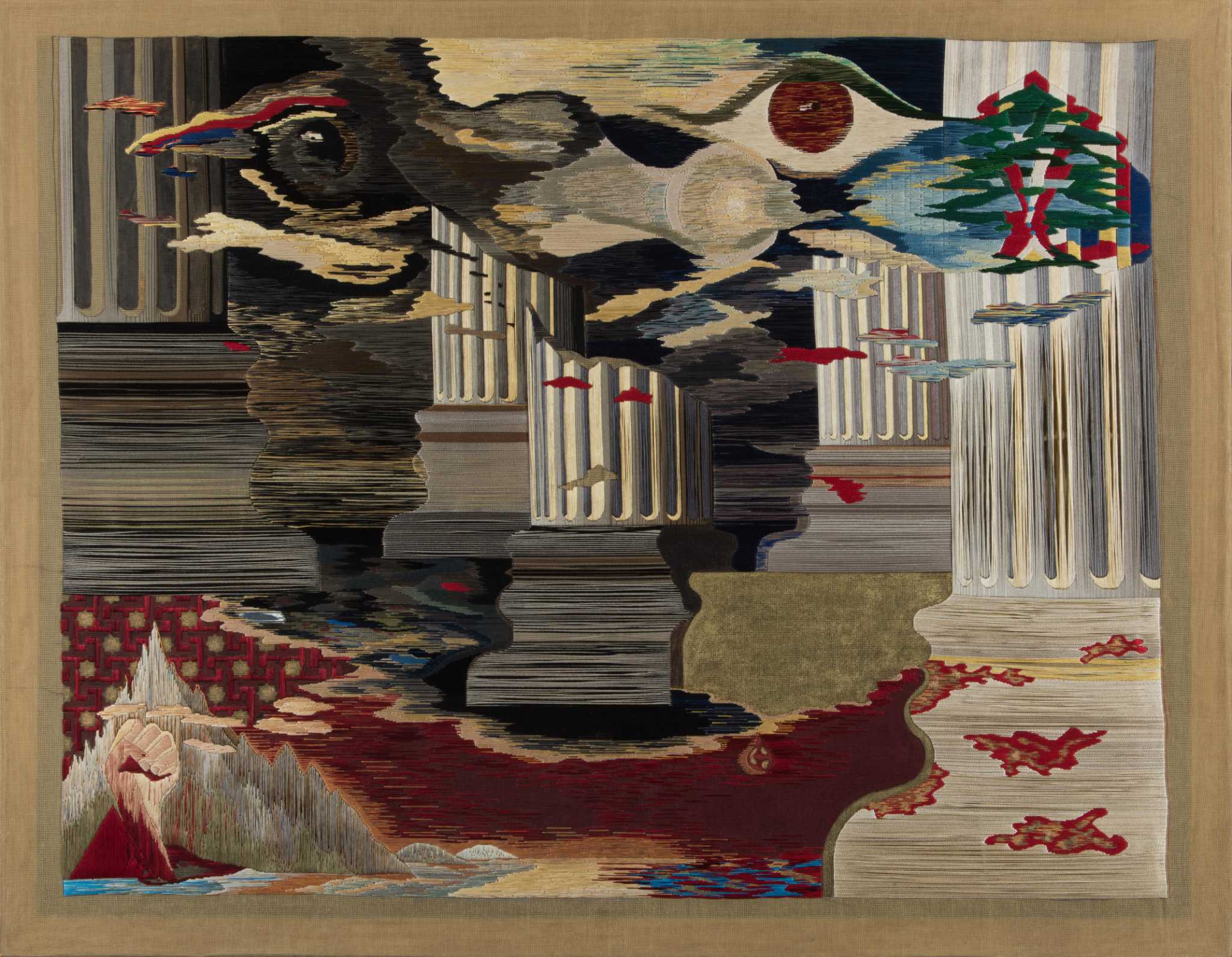 See ‘Blood of the Phoenix’

Or: In “Nicolas Moufarrege: Recognizing my sign” at the Contemporary Arts Museum in Houston, until February 17

Why: The eyes riveted on the spectators of this large needle painting make Nicolas Moufarrege seem strangely present for his first posthumous museum exhibition.

The anchored landscape also sets it apart from most of the other works on display and provides a clue as to why the artist’s other compositions contain so many divided elements: the war in Beirut, Lebanon, his family’s hometown. , made Moufarrege a global migrant. The ground beneath his feet was still moving.

He made his first embroidery work in the form of floral patches for his blue jeans in 1969 or 1970, while he was in the United States thanks to a Fulbright scholarship in chemistry at Harvard. It is quite far from “Le Sang du PhÃ©nix”, created in 1975 in Paris in response to the civil war in Beirut. The cedar near the upper right corner symbolizes Lebanon, while the closed fist at the lower left suggests political opposition.

Classic shattered columns project both timelessness and the ruin of an overthrown order. The edges of their bases are formed by the profile of a human face – one of the many self-portrait references adopted by Moufarrege. He would later identify with Santa Claus (Saint Nicholas) and Spider-Man (he collected comics and loved the mythological weaver Arachne).

Significantly, Moufarrege painted rather than sewn large sections of â€œBlood of the Phoenix,â€ taking his earlier tapestry work into the realm of bold and large-scale contemporary art. The canvas measures nearly 50 by 64 inches. During five years in Paris, Moufarrege produced many other needle paintings that blend his native culture with everything he absorbed, partly in museums – Egyptian, Syrian and Islamic motifs, classical art, works by Italian painters. and French.

â€œHe had a great interest in spiritual and cultural traditions,â€ said curator Dean Daderko, also pointing out how the artist presents classic male nudes from the back, so that they appear to be pulled back slightly; always strangers watching.

When Moufarrege returned to New York in 1980, he became known primarily as a writer who chronicled the nascent East Village scene in New York City. Although he had a residency at PS1 and several gallery exhibitions, his needlepoint paintings had all but disappeared when Daderko saw a small one for the first time in 2006, in a room on the ground floor of the Gray Gallery at New York University.

Daderko waited a long time to unveil “Recognize My Sign”. All but four of the 36 canvases were from Moufarrege’s sister and brother’s homes in Shreveport, Louisiana, where Daderko also leaned over stacks of old notebooks to learn more about the artist’s process. (He has yet to decipher the meaning of the numbers 3, 7, 1 and 2 which often appear in paintings.)

Moufarrege died at the age of 36 in 1985 from AIDS. He was still adrift in the worst possible way as his health deteriorated; people did not yet understand the source of the plague. Refused from Manhattan hospitals, the artist spent his last month and a half in a southern Bronx hospital, where staff taped a skull to his door.

Until then, he had been extremely productive. In his last two years, he found a landscape, if you can call it Roy Lichtenstein’s â€œSelf-Portraitâ€, Katsushika Hokusai’s â€œThirty-Six Views of Mount Fujiâ€ at the beginning of the 19th century, â€œ The Scream â€by Edvard Munch,â€œ Do It Yourself (Landscape) â€by Andy Warhol andâ€œ People Begin to Fly â€by Yves Klein. “

â€œHe works hard, which makes his passing all the more poignant,â€ Daderko said. “It is clear that he had so much more to do.”

Political agenda in Illinois and Chicago on October 25