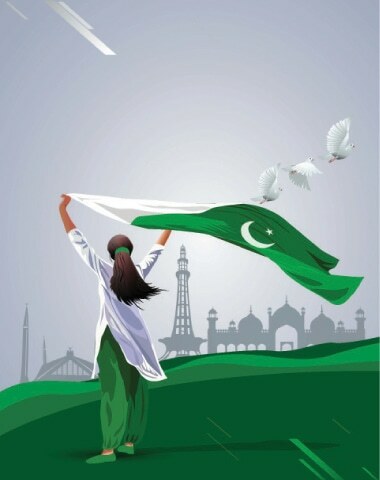 It was Rabia’s birthday and she chose to receive her friends at her house. Mrs. Ali, Rabia’s mother, was also delighted to meet her daughter’s friends. Due to the pandemic, Rabia had not gone to or hosted any parties for the past two years. So it was a day that Rabia had been waiting for a long time.

Rabia had decorated the drawing-room and all the friends were chatting merrily there. Ms. Ali was delighted to see the excited faces and appreciated the children’s energy. All the girls were around 13 years old.

“These moments are precious,” Ms. Ali said to herself as she recalled her high school years with her friends.

The doorbell rang and the pizza delivery boy brought the pizzas they had ordered. Ms. Ali didn’t want to disturb her daughter so she decided to serve the girls lunch herself. She was placing plates, pizzas and drinks on the table for the guests when her attention was caught by something one of the girls said.

“I hate history! What is the use of knowing the past? Even the subject of Pakistani studies makes no sense to me. We all know about Quaid-i-Azam and his struggles, but why do we need to know more about pre-partition events etc. ? We all see what Pakistan is today and we all know that if given the chance we would move to a better place,” she concluded with a shrug!

Ms. Ali did not like the tone or the opinion being aired. She was very disappointed, but chose to remain silent at the time. The girls also continued their discussion over lunch. The saddest part was that most of the girls, including Rabia, were pointing out the things they felt were missing in Pakistan and discussing the issues – bad law and order, corruption, pollution, bumpy roads, gas and water shortages – but none of that. they wanted to play any role in the improvement of the country.

“It’s none of our business, leave this topic!” Let’s plan a meeting for the upcoming holidays – March 23rd. We too will get together and make our resolutions,” a friend said, almost sarcastically. The other girls laughed and continued their lunch.

The pizza soon ran out and they wanted more. Rabia got up to order more when one of her friends stopped her and said, “You’ve already paid a lot. Now let us have a free pizza.

“How? ‘Or’ What?” Rabia asked, as she thought her friend must have a coupon, etc.

“Smartness expensive!” the same friend winked and called the same pizzeria. She started yelling at them that they had delivered overcooked and stale pizzas. She also said the meat smelled bad and the cheese had gone bad.

The manager tried to explain, but she said if they didn’t send fresh pizzas right away, they would make a video of the rotten pizza and put it on social media sites.

The manager tried to handle it as politely as possible but eventually gave up and delivered two fresh pizzas with an apology. The girls were more than happy to receive the free pizzas.

Ms. Ali was unaware of this episode; she was watching the newscast when the girls were leaving. Everyone came to say goodbye and thanked her for such a beautiful party. The news was about the unrest between Ukraine and Russia. The girls also stopped to watch the news and saw the panic and turmoil of the people as they fled their beloved country, leaving their homes and loved ones behind.

Ms. Ali took the opportunity to express her concern: “In fact, we all think that freedom is our right, but forget all those who tried so hard to give us this right. Any place other than our home is not permanent. See, these people will take refuge in neighboring countries in a compromised environment. It’s a real test!

“It is extremely easy to put our country down, but have we ever noticed that all the shortcomings are in us, in our behavior and our attitude, and not in the country itself! Have we ever thought that a country as beautiful as Pakistan, blessed with so many natural resources and defended by huge mountain systems, deserves us as citizens?

“Don’t you all think that we all contribute equally to the corruption that we usually hold others accountable for?” We lie, cheat and try to be too smart,” Ms. Ali concluded in dismay.

The girls said nothing and nodded, looking troubled by this new realization. Mrs. Ali hugged them and they left.

Moments later, she heard a noise coming from the backyard. She was amazed to see Rabia and her friends picking up all the pizza boxes from the vacant lot next to their house. They had previously thrown it out the window in the plot, instead of putting it in the trash.

Also, they wanted to hide from Ms. Ali the extra pizzas they got later.

The girls gave money for the free pizzas and one of them promised that she would pay the money at the outlet when she returned.

After all the guests left, Mrs. Ali called Rabia and hugged her. She acted in a documentary that was made about the birth of Pakistan. The documentary showed the plight of the people then, the massive bloodshed and the cunning tricks played to corner an entire community. He said that the leaders knew that in their fight, they could lose their lives, but they wanted to assure “us”… their future. This resolution started a struggle and today Pakistan is the result!

The ordeal did not stop there, even after independence, people who had migrated had to abandon their parents, their lands, their wealth and their status, to start a new life in a new land! Their efforts were for us, future generations, for which we owe them our last breath.

The few glimpses of people migrating tore Rabia’s heart apart. The scenes were no different from those of people fleeing Ukraine these days. She understood the value of “homes” and thanked the people who gave us the opportunity to be independent citizens of a free country.

Dear children, March 23 is not just another holiday, try to feel the pain and learn about the struggle, the sacrifices and the ideology that have all contributed to giving us the identity we enjoy today. Now it’s up to us to maintain the glory and ensure a better future – not forgetting the past!

As Robert Heinlein said, “A generation that ignores history has no past or future.”