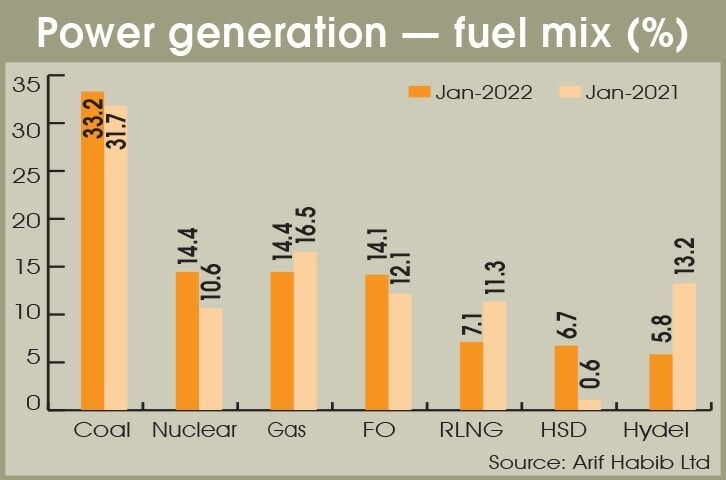 The cost of fuel for power generation has more than doubled

KARACHI: The cost of fuel for power generation in January rose by 101.5% to Rs 12.22 per unit on an annual basis, according to data released by the National Energy Regulatory Authority on Saturday. electric.

The increase in the cost of fuel, which is one of the three components of the final rate that power generators charge their government-backed buyer, was 48.3% on a monthly basis.

According to Tahir Abbas, research manager at Arif Habib Ltd., the sharp increase is due to an increase in production costs based on fuel oil, high-speed diesel (HSD), coal and regasified liquefied natural gas (RLNG). ).

The four fuel sources out of 11 contributed 61.1% to the production mix compared to a collective share of 55.7% a year ago.

Total electricity generation was 8,797 gigawatt hours (11,824 megawatts) in January, up 8.9% from the same month last year. On a monthly basis, however, electricity production fell slightly by 0.3 pc.

HSD-based plants produced 592 GWh of electricity last month, nearly 1,200% more than a year ago. The jump in HSD-generated units is in response to a 31.7% decline in RLNG-based production as gas prices surged in international markets. In addition, production from hydel-based factories also fell nearly 52% in January on a year-on-year basis.

Nuclear power saw the second-highest annual jump (48.3pc) in terms of units produced in January after a 1,100MW plant went online in May 2021.

The country recorded its highest power generation of 136,572 GWh in the last calendar year, up 10.6% from 2020. As with last fiscal year, power generation increased by 7% while the economy grew by 5.4%.

Passages of this week | Seattle Times