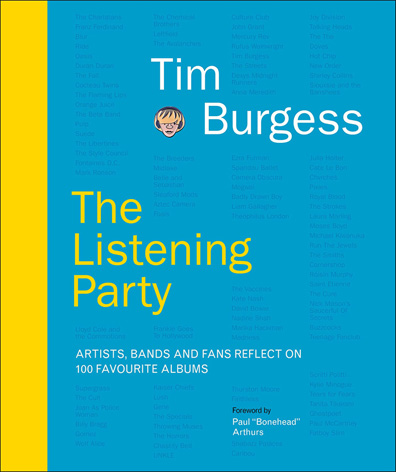 Tim’s Twitter listening evening was one of the few shining moments of the COVID-19 pandemic, especially when the world was in lockdown from early to mid-2020. Tim Burgess, leader of the Madchester / Britpop group The Charlatans, came up with the simple idea – to have musicians tweet live while fans all listen to one of their albums at a preset time – after seeing actor Riz Ahmed spontaneously tweet in 2011 about his film. Four Lions. It was on British TV at the time and Burgess was just watching and also on Twitter. Four years later, he put this idea into action, by organizing the first listening party on Twitter in 2015 for the 25th anniversary of the Charlatans’ debut album, Some Friendly. In March 2020, while confinement was installed, he repeats, for the 30 years of the album. Some Friendly was an important album for Franz Ferdinand frontman Alex Kapranos, who bought it when he was 17, and he tweeted Burgess about it, which led Burgess to suggest an evening of listening for the self-titled debut album from the Scottish group. Blur and Oasis were next and it all grew from there, to the point that Burgess asked Paul McCartney to attend a listening party for his new album. McCartney III and there were more than three evenings of listening per weekday evening and six on weekends.

While there was a certain thrill to following the live listening evenings, where fans could comment or even ask questions, it was difficult to keep up with it all. Fortunately, Burgess has teamed up with DK to Listening party, a 304-page book that compiles top 100 tweets from Tim’s Twitter listening evenings. Each entry is dedicated to a different album, with an intro by Burgess on the album, then one or more tweets about each song on the tracklist. Sometimes musicians have shared behind-the-scenes photos from their listening evenings and some of those are included as well.

Listening party covers some of my favorite albums of all time — Suede’s Star Man Dog, pulp Different class, Tears for fear ‘ Songs from the great chair, Camera Obscura’s Let’s get out of this country, Lush Love life, Doves’ The last broadcast, Mercury Rev Songs of the Deserter, Flaming lips’ The sweet newsletter, Alice’s wolf My love is cool, Belle and Sébastien The boy with the Arab strap, avalanches Since i left you, Badly drawn boy The hour of the mad beast, Julia Holter You have in my desert, Superherb ‘ i should coco, and so on, not to mention my penchant for Some Friendly also. Additionally, it contains two photos taken by my wife Wendy (from Camera Obscura and Doves, photoshoots originally done for Under the radar) and one by my late father, famous music photographer David Redfern (from Scritti Politti). So there is a lot to recommend about this book. Tim’s Twitter listening evening continues, with parties scheduled until February 2022. (www.dk.com)

Inflation will subside by the middle of next year: AHL – Journal